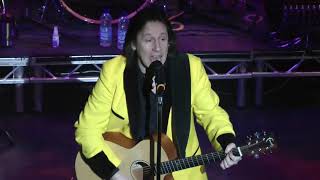 
Showaddywaddy are a pop/rock group from Leicester, England. They specialise in revivals of hit songs from the 1950s and early 1960s, while also issuing original material. Showaddywaddy spent a total of 209 weeks on the UK Singles Chart, and had 10 Top Ten singles, with one reaching number one.


The band was formed in 1973 by the amalgamation of two groups, Choise and the Golden Hammers, the latter often known simply as The Hammers. They both played at the Fosse Way pub in Leicester and soon discovered shared musical tastes. After playing together in jamming sessions, they joined together permanently and Showaddywaddy was born. This led to an eight-member band, with the unusual feature of having two vocalists, two drummers, two guitarists, and two bassists. The band's first professional gig was at the Dreamland Ballroom in Margate, Kent on 1 September 1973.


Showaddywaddy won one programme on the ATV series New Faces, in November 1973, and were runners-up in the "All Winners Final", which was broadcast on 28 December 1973. Showaddywaddy have made nearly 300 television appearances, including their own BBC TV special, Showaddywaddyshow, broadcast between Christmas and New Year in 1980. The band also appeared in the 1975 film Three for All, where they performed "The Party" from their 1974 debut album.


Their first single, "Hey Rock and Roll" , was released in April 1974. It reached number two in the UK Singles Chart. Starting with "Dancin' Party" , the band produced their own records with more cover versions including "I Wonder Why" , "Blue Moon" and another Curtis Lee original "Pretty Little Angel Eyes", again co-written by Tommy Boyce. After their first single, Showaddywaddy went on to have a further 22 UK hits until late summer 1982. Their most recent chart single was "Who Put the Bomp", a number 37 hit in 1982, which they also promoted in their final Top of the Pops performance. In total, they had ten Top Ten singles, a solitary number one , and spent 209 weeks in the UK Singles Chart, including seven successive Top Five entries. Their biggest-selling single was "Under the Moon of Love", which sold 985,000 copies.


They had most of their biggest hits with covers of songs from the 1950s and the early 1960s. These included "Three Steps to Heaven" , "Heartbeat" , "Under the Moon of Love" , "When" , "You Got What It Takes" and "Dancin' Party" . These six singles were all produced by Mike Hurst . On the South African charts, "Three Steps to Heaven" reached number 6 in 1975 and "Under the Moon of Love" number 6 in 1977.


Malcolm Allured left the group in 1984, followed by Russ Field in 1985, and Buddy Gask in 1987. Gask retired to Spain in 2005, and died in 2011 after suffering with ill health for a number of years. Field runs a guest house with his wife in Beadnell, Northumberland, and still plays guitar in a local covers band, Before The Mast. Allured owns a nightclub called MFN at Shipley Gate, Derbyshire , and still plays live in local bands. Field was replaced by Ray Martinez in 1985, who was subsequently replaced by Danny Willson in 1995.


This article uses material from the Wikipedia article "Showaddywaddy", which is released under the Creative Commons Attribution-Share-Alike License 3.0.