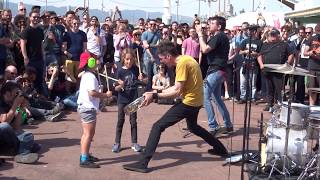 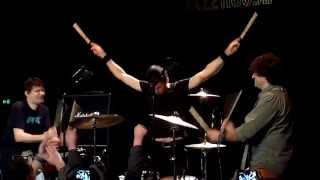 Shellac is an American indie rock band from Chicago, Illinois, composed of Steve Albini , Bob Weston and Todd Trainer and formed in 1992. Their music genre has been classified as post-hardcore and noise rock but they describe themselves as a "minimalist rock trio."


Shellac has a distinctive, minimalist sound based on asymmetric time signatures, repetitive rhythms, an angular guitar sound, and both Albini's and Weston's surreal, bitingly sarcastic lyrics. Songs typically do not have traditional verse/chorus/verse structure and the arrangements are sparse, to the point where some describe them as "amelodic". Shellac's signature sound is often associated with their enthusiasm for vintage Travis Bean guitars, a rare brand of aluminium-necked instruments, and the Interfax "Harmonic Percolator" distortion pedal. Albini is known to use copper plectrums and typically wraps his guitar strap around his waist rather than over his shoulder. The band prefers the intimacy of smaller clubs and live appearances are sporadic.


Both Weston and Albini are recording engineers. They prefer a sparse, analog recording sound with little or no overdubbing, and are meticulous about microphone placement and choice of equipment.


Mid-set in many live performances Shellac take the time for one or more "question and answer" sessions, where members of the band respond in an off-the-cuff and, at times, jocular manner to questions shouted out by fans and hecklers alike.


Shellac made an early decision to not play at festivals, and this position was articulated to All Tomorrow's Parties festival organizer Barry Hogan during the preparation stage of the inaugural ATP event. However, Scottish band Mogwai, curating the festival, convinced Albini to perform: "They completely changed the festival game. Now the whole world has to operate under the knowledge that there are these cool, curated festivals where everyone is treated well and the experience is a generally pleasant one." In 2002, the band curated the All Tomorrow's Parties festival in Camber Sands, England. Knowing that most of the audience had come specifically to see Shellac, the band went on first every morning as an incentive for the festival-goers to be up in time to see the other acts. A CD of tracks from the bands performing at the festival was released on ATP Records.


This article uses material from the Wikipedia article "Shellac", which is released under the Creative Commons Attribution-Share-Alike License 3.0.