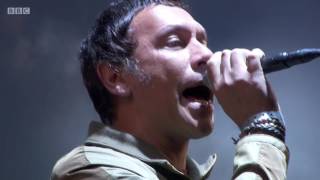 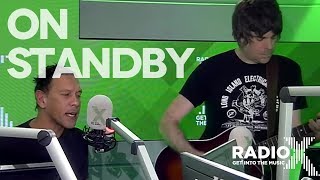 
Shed Seven are an English alternative rock band, formed in York in 1990. One of the groups which contributed to the Britpop music scene of the 1990s, they never attained the degree of mainstream success achieved by the likes of Oasis and Blur. They originally comprised singer Rick Witter, guitarist/keyboardist Joe Johnson, bassist Tom Gladwin and drummer Alan Leach. Johnson was later replaced by Paul Banks.


They belonged to the post-Smiths wave of British musicians such as The Sundays and Marion, with a sound relying heavily on complex guitar arpeggios often in a minor key, and wailing vocals. At the height of their popularity between 1994 and 1999 they had fifteen Top 40 singles and four Top 20 albums in the UK. The band officially broke up in 2003, but reformed for a greatest hits tour in July 2007. Shed Seven continued to play shows around Britain periodically until releasing a new studio album in 2017 with the announcement of Instant Pleasures.


Shed Seven formed in 1990 from the ashes of Brockley Haven, a band featuring frontman Rick Witter, guitarist and songwriter Paul Banks, bassist Tom Gladwin, Magnus Thompson and John Leach, brother of Alan Leach. Both Witter and Banks had also previously played together in a band named ENAM, performing to German exchange students in Banks's front room. Prior to signing a six-album deal with Polydor Records in October 1993, guitarist Joe Johnson left the line-up and was replaced by Paul Banks. The band twice entered the local Fibbers/Evening Press Battle of the Bands competition, twice failing to win, whilst in September 1993, still unsigned, they were voted the third best live act at London's Inner City Festival. The initial press attention enjoyed by the band came as a result of the positive reviews of their live shows, coupled with complimentary comparisons to The Smiths. In March 1994, an article by Dave Simpson of Melody Maker, charting the aspirations of "the UK's brightest hopes", stated that; "...Shed Seven's beautifully posed, epic music is different. Not so much New Wave of New Wave as post-Smiths, they're taking the insular bedsit angst of Morrissey's early music and subverting it with a brash and insensitive sexual narcissism."


Their debut single, the double A-side "Mark"/"Casino Girl"—labelled by NME as "spirited 'Barbarism Begins at Home' skirl" – was released on 7 March 1994 to considerable acclaim from some sections of the music press, but failed to make the UK Top 40. The follow-up single, "Dolphin", a song co-written with former member Johnson during Banks' two-year absence from the band's line-up, was released on 13 June 1994 peaking at number 28 with first week sales reaching 15,000, leading to Shed Seven's first Top of the Pops appearance on 23 June 1994. Despite their third single release, "Speakeasy", entering the UK charts at number 24 and giving them their biggest hit to date, the first negative press reviews began to emerge. Writing for the UK music magazine NME in August 1994, John Mulvey believed that it represented "our clumsy blokes trying to come over all sensuous, fragile and complex."—"Speakeasy" was later to be re-written as an advertising jingle in 1999, for the mobile phone company The Link, with Witter later admitting regret at his re-recording and re-wording of the original. As a result, the song was omitted from Shed Seven setlists for a number of years, only making its live comeback as a stripped-down acoustic version on their "farewell" tour in December 2003.


In September 1994, the band released their debut album, Change Giver, entering the UK album chart at number 16 and giving the group their first Gold disc. Despite it spending just two weeks in the chart, the "critically underrated debut album", which NME declared "an attempted stab in the face of their critics", gave the band three UK Top 40 singles. As well as enjoying popularity in both the UK and Australia, Shed Seven also found an audience in Thailand, where they managed to beat Take That to the Christmas number 1 spot with their fourth single release, "Ocean Pie". The following April, "Where Have You Been Tonight?", the first record to emerge from the band's collaboration with their new producer, Chris Sheldon, was issued as their fifth single, peaking at number 23 and continuing the band's chart-placing run. Although the single was "rush released" with the intention of it being followed by a swiftly recorded second album, the band failed to capitalize on the song's success as it became Shed Seven's one and only release throughout 1995.


With five UK Top 40 entries in 1996, Shed Seven had more hit singles than any other act that year, the high point coming with the release of their seventh single, "Going For Gold", which entered the UK chart at number 8 on 17 March and remains their biggest chart hit to date. A sold-out thirteen-date Autumn tour followed, including their debut at the York Barbican Centre. The definitive band line-up released 3 studio albums - Change Giver , A Maximum High and Let It Ride - along with a greatest hits compilation, Going For Gold . The release of the latter was forced upon the band by their record company, Polydor, after Let It Ride failed to match the album sales of its predecessor, which sold 250,000 copies in Britain alone. Despite the band's reservations about issuing such a compilation so soon in their career, the album went on to sell 130,000 copies and featured brand new material in "Disco Down" and "High Hopes", both intended to be issued as singles. "Disco Down" went on to become the last Banks-era hit for the band, peaking at number 13, whilst "High Hopes" was sidelined by Polydor in favour of a proposed re-release of the previous single, "Going For Gold". However, the band refused to comply, leading to Shed Seven and Polydor Records parting company in late 1999;


This article uses material from the Wikipedia article "Shed Seven", which is released under the Creative Commons Attribution-Share-Alike License 3.0.