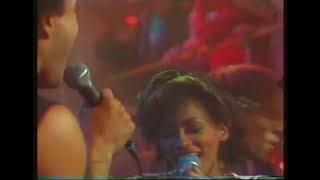 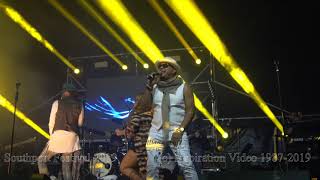 Shalamar Live at the Southport Festival 2019 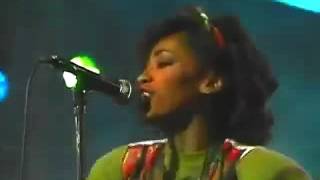 
Shalamar is a Grammy award winning American R&B and soul music vocal group active since the late 1970s and throughout the 1980s. Shalamar's classic line-up on the SOLAR label consisted of Howard Hewett, Jody Watley, and Jeffrey Daniel. It was originally a disco-driven vehicle created by Soul Train booking agent Dick Griffey and show creator and producer Don Cornelius. They went on to be an influential dance trio, masterminded by Cornelius. As noted in the British Hit Singles & Albums, they were regarded as fashion icons and trendsetters, and helped to introduce "body-popping" to the United Kingdom. Their collective name, "Shalamar", was picked by Griffey.


The first hit credited to Shalamar was "Uptown Festival" , which was recorded at Ike & Tina Turner's studio Bolic Sound in 1976. It was released on Soul Train Records. Its success inspired Griffey and Don Cornelius to replace session singers with popular Soul Train dancers Jody Watley and Jeffrey Daniel, to join original Shalamar lead singer Gary Mumford. Gerald Brown took over the spot vacated by Mumford for the group's second album, Disco Gardens , which featured the hit "Take That to the Bank". After conflicts over lack of payment from Griffey and SOLAR , Brown left the group.Howard Hewett replaced Brown in 1979. The group was joined up with producer Leon Sylvers III in 1979, signed with SOLAR, and scored a US million seller with "The Second Time Around" . The classic line up of Hewett, Watley and Daniel would be the most successful.


In the UK, the group had a string of hits with songs such as "Take That to the Bank" , "I Owe You One" , and songs from the Friends album: "I Can Make You Feel Good" , "A Night to Remember", "There It Is", and the title track "Friends". The album, which crossed the genres of pop, disco, and soul, was also a big seller in the UK in 1982. The band's record sales in the UK increased when Daniel demonstrated his body-popping dancing skills on BBC Television's music programme, Top of the Pops, which had premiered the Moonwalk on television for the first time. Michael Jackson was a fan of Shalamar, in particular, Daniel and his dance moves, after watching him on Soul Train. Jackson and Daniel met afterward, and Jackson took his then 12-year-old sister Janet to see Shalamar perform at Disneyland. Daniel and Jackson co-choreographed Jackson's "Bad" and "Smooth Criminal" videos from the album Bad .


The "classic" lineup of Shalamar scored a total of five Gold albums in the US with Big Fun , Three for Love - which eventually went Platinum - Friends which also went Platinum, The Look , and Heartbreak . The group took a knock when Watley and Daniel separately left the band over conflicts within the group, and other issues with Dick Griffey and SOLAR. Adding to Watley's impetus to depart was her increasing frustration with Griffey and SOLAR, shortly after the release of their next album, The Look . Nonetheless, the album yielded a number of UK hit singles, including "Disappearing Act", the Grammy nominated "Dead Giveaway", and "Over and Over". The album itself moved Shalamar into a more new wave/synthpop direction, with rock guitars to the fore. But The Look generally was not the success that Friends had been the previous year.


With a mid 1980s line-up change, adding Micki Free and Delisa Davis, Shalamar returned to the US Top 20 in 1984 with "Dancing in the Sheets" from the Footloose soundtrack. The song peaked at #17, and the group won a Grammy for Don't Get Stopped In Beverly Hills from Beverly Hills Cop soundtrack in 1984.


In 1985, Kool & the Gang, Midnight Star, Shalamar, and Klymaxx performed at the Marriott Convention Center in Oklahoma City. That year Hewett departed to begin his successful solo career, and was replaced by Sydney Justin. Following Hewett's departure, the band began to lose popularity;Circumstantial Evidence did not sell well, and the band broke up shortly after Wake Up was released.


This article uses material from the Wikipedia article "Shalamar", which is released under the Creative Commons Attribution-Share-Alike License 3.0.