Set It Off Tickets Birmingham 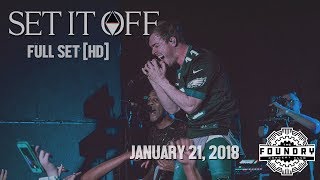 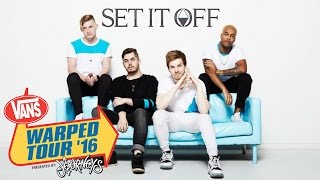 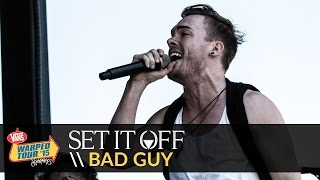 About Set It Off


Set It Off is an American rock band that started in Tampa, Florida. The band initially gained a large following through vocalist Cody Carson's YouTube channel. Their following took on the name "143 family" later to be known as "Dreamcatchers". Set It Off was subsequently signed by Equal Vision Records after releasing a string of successful extended plays. In 2018 they signed to Fearless Records, and in February 2019 the band released Midnight, their fourth studio album, through the label.


Cody Carson met Dan Clermont in high school, as both were in the marching band. Austin M. Kerr and Zach DeWall were in their own band together prior to the formation of Set It Off. The two bands brushed against each other while playing local shows, occasionally at the same time. After high school, Carson left for Ohio to attend the Oberlin Conservatory of Music as a classical clarinet student. In his first year, after exchanging a series of YouTube videos with All Time Low's frontman Alex Gaskarth, Carson asked if he could sing "Coffee Shop Soundtrack" on stage at the group's upcoming concert at the Cleveland House of Blues via a YouTube video, to which Gaskarth agreed. The performance helped Carson confirm his dream of starting a rock band, and not long afterwards, Carson dropped out of college and used his school money to come back and start up the band.


DeWall and Kerr were amongst the first to join the band, and Dan Clermont also followed. James Arran was Set It Off's initial drummer, but financial struggles made gas purchases difficult for him, which resulted in Arran resigning on August 24, 2008. Blake Howell became Set It Off's next drummer but soon left the band due to difficulties his family was facing. Howell was replaced by Benjamin Panico on October 30, 2009; however, he and the band have since parted ways so that Panico could pursue his GED and later start his own photography studio. Howell was able to introduce the band to their current drummer, Maxx Danziger. Dan Clermont, the bands lead guitar player, officially left the band in 2019 due to rumors of sexual misconduct.


Carson stated, "Our main inspiration in writing this album was derived from personal experiences growing up. I loved being able to turn to songs that I could personally relate to. I want to provide that same kind of coping source for people. I want people to be able to turn on Horrible Kids and pick a song that pinpoints exactly what they're going through and allows them to vent through it."


After being released, the album debuted in the top 100 Alternative Albums on iTunes.Horrible Kids was recorded at Red Sparrow Studios in Wilson, NC. It was produced, engineered, and mixed by Brandon Ham and John Harrell.


This article uses material from the Wikipedia article "Set It Off", which is released under the Creative Commons Attribution-Share-Alike License 3.0.

Set It Off Tour