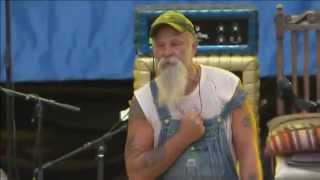 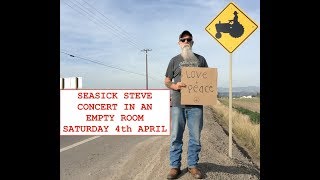 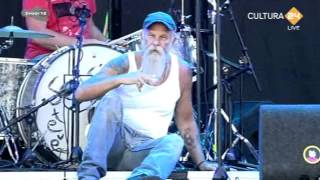 Steven Gene Wold , commonly known as Seasick Steve, is an American blues musician. He plays mostly personalized guitars and sings, usually about his early life doing casual work. From the late 1960s, he worked as a musician and recording engineer in the US and Europe, as well as pursuing other work, before his commercial breakthrough, initially in the UK, at the end of 2006. Some sources suggest an earlier birth date.


The publicity about Wold at the time he first became successful in Britain, in the mid-2000s, suggested that he was then aged in his sixties, and emphasised his past as a hobo in Tennessee and Mississippi. In a 2008 interview in Memphis, Wold was quoted as stating: "I came down here as a young feller looking for the blues, but I didn't find them... Wasn't in Clarksdale but an hour before a big, old redneck policeman ran me right out of town again. That was how it was back then, and there were some places hereabouts you just didn't go if you were a hobo." By his own account, he would travel long distances by hopping freight trains, looking for work as a farm laborer or in other seasonal jobs. He claimed that he had worked at a carnival, as a cowboy and as a migrant worker. In a 2007 interview, he said: "I rode them for 14 years off and on..", adding "I've been married to this one girl for 25 years, so I’m a little bit settled down now..."


In 2016, an unauthorized biography by Matthew Wright presented evidence that parts of Wold's backstory may have been exaggerated. Wright drew on interviews with Wold's estranged eldest son as well as previously published material covering his career in music since the late 1960s, and commented that Wold was "retiring about facts of his own life".


Steve Wold was born in Oakland, California, as Steven Gene Leach, though his biographer suggests that he may have been adopted as a baby. He took the surname Wold in the early 1980s, from that of his second wife. Official birth records confirm his birth year as 1951. In 2000, he gave his age as 50, though later publicity implied that he was older and some sources such as Allmusic claim he was born in 1941.


When he was four years old, his parents split up and he continued to live with his mother. He claimed that as a child he was taught to play the guitar by K. C. Douglas, who worked at his grandfather's garage, and later realised that he had been taught the blues. Douglas wrote the song "Mercury Blues" and had played with Tommy Johnson in the early 1940s. His mother remarried, to a Korean War veteran who Wold characterized as abusive, and, at the age of about 13, Wold claimed that he left home following a violent confrontation with his stepfather.


Wold claimed to have lived rough and on the road in Tennessee, Mississippi and elsewhere, until at least the late 1960s. However, Wright's biography claims that Wold lived in Haight-Ashbury, San Francisco, for some time from 1965. He attended the Monterey Pop Festival, regularly saw bands such as The Grateful Dead perform in the area, and became acquainted with Janis Joplin and Jimi Hendrix.


In about 1969, he toured clubs in the region as a backing musician with Lightnin' Hopkins. In 1970, as Steve Leach, he became the bass player in an innovative band, Shanti, who performed a fusion of Indian and rock music. Other band members included Zakir Hussain and Aashish Khan, and all the band members were adherents of Transcendental Meditation. In liner notes for a 2015 reissue of Shanti's only album, writer Richie Unterberger states that "bassist Steve Leach has reinvented himself as the blues musician Seasick Steve", and his participation in Shanti was confirmed by Seattle band the Tremens.


This article uses material from the Wikipedia article "Seasick Steve", which is released under the Creative Commons Attribution-Share-Alike License 3.0.