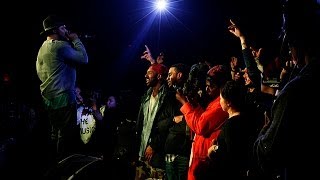 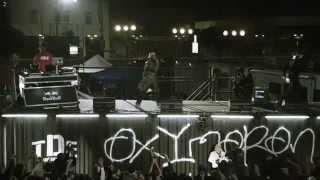 
In 2008, Hanley released his first full-length project, a mixtape titled ScHoolboy Turned Hustla. He later released a follow-up in 2009, titled Gangsta & Soul. He then returned in January 2011, with his first independent album, titled Setbacks. The project, released under TDE, to digital retailers only, reached number 100 on the US Billboard 200 chart. A little over a year later, his second independent album Habits & Contradictions, was also released exclusively to digital retailers. The album received generally favorable reviews and debuted at number 111 on the US Billboard 200.


After signing with Interscope, Hanley subsequently began recording his major-label debut studio album, titled Oxymoron. The album was released on February 25, 2014 and debuted at number one on the US Billboard 200. The album was supported by the singles "Collard Greens", "Man of the Year", "Break the Bank", "Studio" and "Hell of a Night". "Collard Greens", "Man of the Year" and "Studio" all charted on the US Billboard Hot 100 chart, with the latter single becoming his best-performing as a lead artist.


Quincy Matthew Hanley was born October 26, 1986 on a military base in Wiesbaden, Germany. His parents divorced before he was born, and his mother gave him a surname different from those of either of his parents, choosing one at random. His father remained in the Army while his mother left and moved with Hanley to Texas for a couple years, before settling in California. He grew up in South Central Los Angeles, California, on 51st Street, neighboring Figueroa and Hoover Street. He attended John Muir Middle School. He claims to have been playing American football from the age of six years, up until he was 21. Hanley played receiver, cornerback, and tailback, and in college he played receiver and returner.


Growing up on Hoover Street, Hanley joined a street gang called the 52 Hoover Gangster Crips: "I was gang-banging at 12. I was a Hoover Crip. My homies were doing it and I wanted to do it. I can't really explain that. I didn't get into it with another hood or anything like that. I was just following the leader." Before turning to music, Hanley became a drug dealer selling Oxycontin, and for a short time crack and marijuana. In 2007, he was arrested for a crime he, at the time, would not disclose and says he was sent to jail for six months, half of which he finished on house arrest. He later revealed on reddit that it was related to a home invasion but did not go into detail. In an interview with Montreality, when asked what jobs he held as a teenager, he noted that aside from selling drugs, stealing, and gang banging, he used to put air in bikes at an auto shop on 49th and Figueroa Street, when he was 10 years old. His first big pay check was around $20,000 from his first rap records. Schoolboy Q started writing verses when he was in his teen years, but didn't seriously start writing self-proclaimed, fully devoted verses and lyrics until he was 21, stating that as he grew towards his legal years he started to realizing that music allowed "you...to let your aggression out, so you got to get in the booth and let it out." On Quincy's internal struggle to survive the streets and make ends meet, while making a name for himself, he says "I was just lost; I didn't know what I wanted to do. I was just trying to do something. Then I found music and it was just over after that. I made my first little bit of money doing music, after that I wanted to get used to doing it, and I kept rapping. Then it became something that I had to do."


Hanley has said he wrote his first verse when he was 16, but was not serious about music until he was 21. Music became his way of expressing himself. In 2006, he began to work with Top Dawg Entertainment , a Carson-based independent record label, recording at their studio House of Pain and collaborating with their artists. His first time at TDE's studio, Hanley worked with his soon to be Black Hippy cohorts Jay Rock and Ab-Soul. This eventually led to Hanley signing a recording contract with TDE. On July 29, 2008, Hanley released his first mixtape titled Schoolboy Turned Hustla, with G.E.D. Inc., the same imprint that helped launch the career of fellow West Coast rapper Tyga, with whom Schoolboy Q worked with early in their respective careers. After the release of Schoolboy Turned Hustla, he signed a deal with Top Dawg Entertainment in 2009, where he later formed Black Hippy, with fellow label-mates and frequent collaborators, Kendrick Lamar, Jay Rock and Ab-Soul.


This article uses material from the Wikipedia article "ScHoolboy Q", which is released under the Creative Commons Attribution-Share-Alike License 3.0.