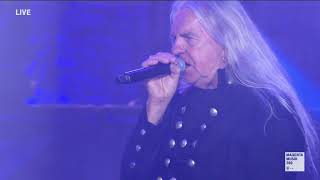 Saxon are an English heavy metal band formed in 1977 in Barnsley. As leaders of the new wave of British heavy metal , they had eight UK Top 40 albums in the 1980s including four UK Top 10 albums and two Top 5 albums. They had numerous singles in the UK Singles Chart and chart success all over Europe and Japan, as well as success in the United States.


During the 1980s, Saxon established themselves among Europe's most successful metal acts. The band tours regularly and have sold more than 15 million albums worldwide. They have also been cited as a major influence or inspiration by notable bands, including Mötley Crüe, Metallica, Megadeth, Slayer, Anthrax, Pantera, Testament, Dokken, Skid Row, Dream Theater, Exodus, Overkill, King Diamond and Celtic Frost.


They were originally named "Son of a Bitch" and gigged extensively in 1976-78 and recorded at least one demo in 1976 using that name.


The band changed their name to Saxon in July 1978 and in September the same year the band signed to French record label Carrere, run by Freddy Cannon in the UK. They began by supporting established bands such as Motörhead and Ian Gillan Band, and released their eponymous debut album in 1979.


This article uses material from the Wikipedia article "Saxon", which is released under the Creative Commons Attribution-Share-Alike License 3.0.