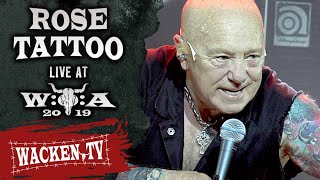 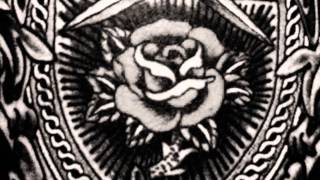 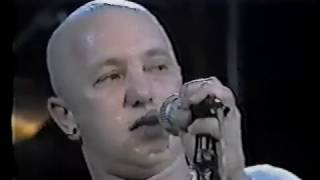 
Rose Tattoo are an Australian rock and roll band, now led by Angry Anderson, which formed in Sydney in 1976. Their sound is hard rock mixed with blues rock influences, with songs including "Bad Boy for Love", "Rock 'n' Roll Outlaw", "Nice Boys", "We Can't Be Beaten" and "Scarred for Life". Their first four albums were produced by Harry Vanda and George Young who also worked with AC/DC. They disbanded in 1987, subsequently reforming briefly in 1993 to support Guns N' Roses on an Australian tour. They reassembled again from 1998 and have since released two more studio albums.


According to Australian rock music historian Ian McFarlane, Rose Tattoo are "one of the most revered bands of all time. The Tatts played peerless, street-level heavy blues with the emphasis on slide guitar and strident lyric statements". Guns N' Roses, L.A. Guns, Keel, Nashville Pussy, Motosierra, Pud Spuke, Helen Schneider, Skrewdriver, and the Uruguayan band the Knight's Night have covered Rose Tattoo songs. On 16 August 2006, they were inducted into the Australian Recording Industry Association Hall of Fame.


Rose Tattoo were formed in Sydney in 1976 with Leigh Johnston on rhythm guitar, Tony Lake on lead vocals and they were led by slide guitarist Peter Wells — who had departed as bass guitarist of heavy metal band, Buffalo. Drummer Michael Vandersluys completed the line-up.Ian Rilen from Band of Light joined on bass guitar. He had taught himself to play while in prison and gave Wells' band the street-cred he was looking for. Rhythm guitarist Mick Cocks soon replaced Johnston; Lake and Vandersluys were substituted by former Buster Brown members Angry Anderson and Dallas "Digger" Royall, respectively. Melbourne-based Buster Brown had played at the 1974 Sunbury Festival and had included future AC/DC drummer Phil Rudd. Rose Tattoo had an early performance on New Year's Eve at the local rock club, Chequers.


Chiefly inspired by the Rolling Stones, Faces and Billy Thorpe and his 1970s Aztecs, Rose Tattoo's hard-rocking sound quickly earned a following in the Sydney area. Members of AC/DC were fans and recommended them to their label, Albert Productions. The band's debut, single "Bad Boy for Love", was written by Rilen, who left to form punk rock group, X, prior to its release in October 1977. "Bad Boy for Love" was produced by Vanda & Young and peaked at No. 19 on the Australian Kent Music Report Singles Chart. Initially Cocks switched to bass guitar to cover Rilen's departure, then Chris Turner joined on bass guitar. The band toured nationally on the pub rock circuit competing with the Angels, Cold Chisel, Dragon and Kevin Borich Express.


One-time Buster Brown bass guitarist Geordie Leach was recruited to record their self-titled debut LP, Rose Tattoo, which reached the top 40 on the Australian Kent Music Report Albums Chart in November 1978. The album, produced by Vanda & Young, was released in some markets as Rock N' Roll Outlaw after their second single, "Rock N' Roll Outlaw" which did not reach the top 50. Leach left the band in May 1979 to be replaced in October by guitarist Lobby Loyde filling in on bass guitar . During his brief tenure, they recorded "Legalise Realise" which was released as an independent split single in March 1980, the other track, "Bong on Aussie", was by country singer Colin Paterson, to publicise a campaign to legalise marijuana. Later in 1980, they toured the United States and then toured Europe , but by September Loyde had left and Leach returned.


This article uses material from the Wikipedia article "Rose Tattoo", which is released under the Creative Commons Attribution-Share-Alike License 3.0.