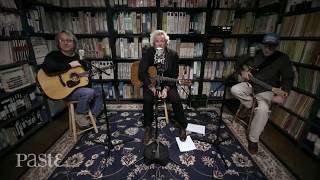 Robert Earl Keen is an American singer-songwriter and entertainer. Debuting with 1984's No Kinda Dancer, the Houston native has recorded 18 full-length albums for both independent and major record labels. His songs have had cover versions recorded by many musicians, including George Strait, Joe Ely, Lyle Lovett, The Highwaymen and Nanci Griffith


Although both his albums and his live performances span many different styles, from folk, country, and bluegrass to rock, he is most commonly affiliated with roots music. Keen has toured extensively both in the US and abroad throughout his career, and was inducted into the Texas Heritage Songwriters Hall of Fame in 2012 along with Lyle Lovett and the late Townes Van Zandt.


Keen was born and grew up in Houston, Texas, United States. As a teenager, Keen was an avid reader who excelled in writing and literature classes. Keen was a fan of the English rock band Cream, and was influenced by country music by artists like Willie Nelson.


He started playing guitar himself shortly thereafter, learning to play classic country covers out of a songbook the summer before starting college at Texas A&M University in College Station, Texas. He graduated with a Bachelor of Arts in English in 1978 and began writing songs and playing bluegrass and folk music with friends, including his childhood friend Bryan Duckworth. During his college years Keen lived with future musician Lyle Lovett.


In 1978, Keen graduated from Texas A&M and moved to Austin, Texas. He performed in Austin's nightclubs and live music venues like the Cactus Cafe and Gruene Hall in nearby New Braunfels. In 1983, Keen won the New Folk competition at the Kerrville Folk Festival in Kerrville, Texas. That same year, he began making his self-produced first album, No Kinda Dancer.


Keen returned to Texas, in Nashville he signed a publishing deal, a new independent label deal, and signed with a national booking agent. After the release of his second and third albums, 1988's The Live Album and 1989's West Textures, he began to have commercial success.


West Textures featured the first recording of what would soon become Keen's signature song, "The Road Goes on Forever". Fellow Texan Joe Ely recorded the song on his 1993 album Love and Danger, along with another Keen song, "Whenever Kindness Fails". Keen's own version of "Whenever Kindness Fails" appeared on his fourth album, 1993's A Bigger Piece of Sky. In 1994, he released Gringo Honeymoon. In 1996, he released No. 2 Live Dinner.


This article uses material from the Wikipedia article "Robert Earl Keen", which is released under the Creative Commons Attribution-Share-Alike License 3.0.