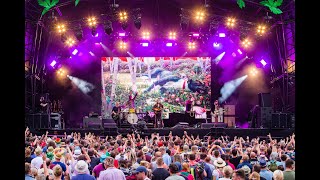 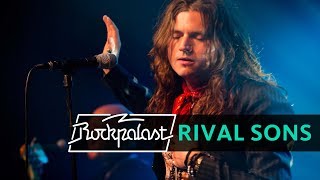 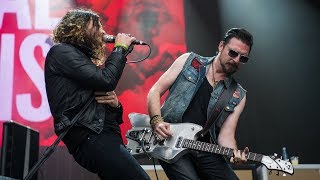 
Rival Sons is an American rock band formed in Long Beach, California, in 2009. The band consists of Jay Buchanan , Scott Holiday , Dave Beste and Michael Miley . They are joined by keyboard player Todd Ögren when touring. They are signed to Atlantic Records via Dave Cobb's label Low Country Sound, an imprint of Elektra. They have released six albums and one EP.


Rival Sons formed in Long Beach, where Jay Buchanan and Michael Miley lived. Buchanan previously recorded as a solo artist and with his Buchanan band. He independently released All Understood in 2004 and True Love EP in 2006. Rival Sons formed from the remnants of guitarist Scott Holiday's previous band. He had been active in a number of bands, including Human Lab, who were signed to Atlantic Records, but which he left and formed Black Summer Crush.


In 2006 Holiday came across Buchanan while searching on MySpace for a singer. Drummer Michael Miley had previously worked with Buchanan and he had met bassist Robin Everhart playing at a benefit concert at Isaac Hayes house for Hurricane Katrina in Long Beach. The union of Holiday, Buchanan, Everhart and Miley led to the formation of Rival Sons.


As a singer-songwriter Buchanan was sceptical about joining a rock and roll band but after seeing the reception to the band's debut album Before the Fire produced by Dave Cobb, Buchanan committed to Rival Sons full-time. Jack Rivera of The Huffington Post declared them "A rock band to watch" in November 2009. Following this acclaim, they were invited to perform as a supporting act for AC/DC, Alice Cooper, Black Sabbath and Kid Rock shows. During this time, Rival Sons also performed on the race track during a televised show of the Indianapolis 500.


After the success of Before the Fire, the band recorded a self-titled EP in 2010, which caught the attention of Earache Records founder Digby Pearson and the band was offered a record deal in November 2010. The signing led to the band immediately recording the album Pressure & Time on the Earache label in early 2011. Their self-titled EP was re-released digitally by Earache Records in February 2011, from which their debut European single, "Torture", was taken.


Rival Sons played at Gene Simmons' "Aces & Angels" Super Bowl party on February 2, 2011, before making their European debut appearance at Camden Barfly on February 12, 2011, for the HMV Next Big Thing. The band Vintage Trouble supported their act and the show sold out in advance, which started a nearly unbroken string of European sell-out shows. In March 2011 a string of shows at Canadian Music Week, SXSW and the House of Blues was announced.


This article uses material from the Wikipedia article "Rival Sons", which is released under the Creative Commons Attribution-Share-Alike License 3.0.