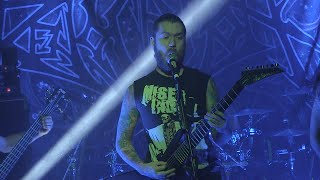 
In 2000, guitarist/vocalist Dave Davidson, drummer Phil Dubois-Coyne and bassist Anthony Buda, met while attending a high school in Boston, Massachusetts. Influenced by Guns N' Roses and Metallica, the trio formed Cryptic Warning. As Cryptic Warning, the band recorded its first demo in 2002 and gained an underground following in Boston, and surrounding area. A second demo, Internally Reviled, was recorded in 2004. In 2005, Cryptic Warning recorded and released an independent album, Sanity's Aberration, but was not content with the quality of the album's production. Remembering those recordings, Davidson said: "We didn't record the album with a metal guy, so we didn't get the sound we wanted. The heaviest reference in our producer's discography was The Cult. A lot of people still love that record—our old-school fans who used to show up for all of the shows—but to us, we weren't really satisfied with the production of that. We felt it was one of the mistakes we made."


In 2006, Cryptic Warning disbanded and Revocation formed with the lineup intact. Davidson commented: "I think, looking a little deeper into it, we made a lot of mistakes with Cryptic Warning. We were younger and didn't really know what we were doing, so Revocation was us starting fresh with a clean slate and revoking our past mistakes." With a direction change, Revocation promptly recorded a three-song demo titled Summon the Spawn, and in 2008 they went back into the studio to record their first full-length album, Empire of the Obscene. The full length was self-released, and the band financed its own tour, attracting the interest of several record labels. Revocation subsequently signed to Relapse Records.


The band did a number of regional shows before recording their second full-length album, Existence Is Futile, released on September 29, 2009. The album was described by Allmusic as "one of the best pure metal albums of 2009", while Spin magazine named Revocation as one of the ten artists to watch in 2010. In October 2009, the band performed for the Relapse showcase at CMJ Music Marathon. On August 16, 2011, the band released their third full-length album, Chaos of Forms. Their fourth full-length studio release, self-titled Revocation, was released on August 5, 2013.


In early April 2014, it was announced that Revocation had signed with Metal Blade Records and that the recording of a new album had begun. The band's fifth full-length Deathless, was released on October 14, 2014. Revocation embarked on a fall tour in the U.S. with Crowbar, Havok, Fit For An Autopsy, and Armed for Apocalypse. Following the fall tour, they trekked across Europe with Cannibal Corpse and Aeon.


In June 2015, drummer Phil Dubois-Coyne announced that he was leaving the band. He was replaced by Ash Pearson, the former drummer of 3 Inches of Blood.


In September 2015, the band announced that Empire of the Obscene was to be re-issued on November 13, 2015 via Metal Blade Records. Remixed and remastered, the album included bonus tracks from their 2006 EP, Summon the Spawn.


This article uses material from the Wikipedia article "Revocation", which is released under the Creative Commons Attribution-Share-Alike License 3.0.