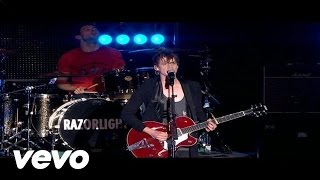 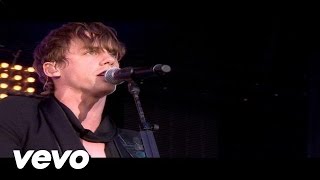 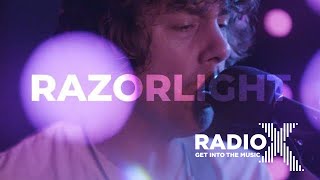 
Razorlight are an English indie rock band, formed in 2002 in London by lead singer and guitarist Johnny Borrell. Along with Borrell, the current line-up of the band is composed of founding member Björn Ågren on guitar, keyboardist Reni Lane, bassist Ben Ellis and drummer Mat Hector.


The band have gone through several line-up changes, with Borrell remaining the sole permanent member. They released three studio albums before splitting up in 2014. The band reformed in 2017 and released the album Olympus Sleeping in 2018.


They are best known for the singles Golden Touch and America.


The band was formed in 2002 by Johnny Borrell, after having performed across London with the likes of The Libertines as a solo acoustic singer-songwriter. It is often reported that Borrell was a member of the Libertines, but Carl Barat has since revealed that he was just taught the bass lines for 4 songs to play for a showcase for Rough Trade Records and failed to turn up for it and never played with the band live. Borrell first enlisted Swedish-born guitarist Björn Ågren via an advert in the NME, who then introduced fellow-Swede bassist Carl Dalemo to Borrell. Borell then brought in school friend Christian Smith-Pancorvo on drums, and they rehearsed in East London for six months before playing their first gig 17 September 2002 at Dingwalls in Camden, London supporting the Von Bondies. Former NME journalist Roger Morton, who had been managing the band from the beginning, began looking to get the band into a recording studio and a session was booked at Liam Watson's Toe Rag Studios to record early versions of the tracks Rip It Up, Rock 'n' Roll Lies and In the City. The results of these sessions gained radio play on the John Kennedy Show on XFM who described the band as being "the best unsigned band in Britain", and led to A&R attention. Following a bidding war to sign the band, they signed to Mercury Records.


The band released their debut album Up All Night on 28 June 2004, reaching number 3 in the UK album charts. The critical reception was generally positive, receiving good reviews from NME, Q magazine and Billboard. Drummer Christian Smith-Pancorvo left the band in April and was replaced by Andy Burrows the following month.Up All Night was re-issued in April 2005, including the stand-alone single Somewhere Else as a bonus track, and peaked at Number 2.


In July 2005, the band performed at Hyde Park, London as part of the Live 8 series of concerts. However, the band came under fire for being the only band to not donate their extra revenue to charity. The band subsequently claimed that due to their "fledgling status", they were unable to make such a commitment.


This article uses material from the Wikipedia article "Razorlight", which is released under the Creative Commons Attribution-Share-Alike License 3.0.