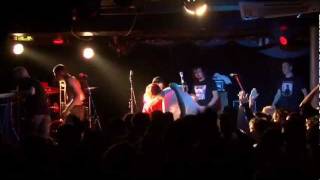 Random Hand Live At The Underworld 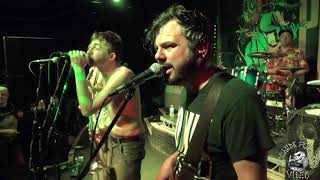 Random Hand is a British ska band, formed in Keighley in 2002. Their sound fuses influences from many genres, including ska, reggae, punk rock, metal, hip hop and dub. The band is typically associated with the punk subculture, due to its ethics and lyrical content. Their lyrical themes are mostly of a sociopolitical nature, however recent albums Inhale/Exhale and Seething Is Believing, feature more personal lyrics and subject matter.


Formed in late 2002, the original lineup consisted of Joe Tilston , Robin Leitch , Matt Crosher and Joe Dimuantes . Random Hand played their first show on 31 December 2002 in a friend's basement in Haworth, with other shows around the West Yorkshire, namely in Huddersfield, Leeds and Halifax.


In summer 2003, the band recorded a demo, which was given as a free release for download. In late 2004, the band spent time with producer TimG to record the On The March EP.The band set off on their first tour in January 2004 with Catch-it Kebabs and Zen Baseball Bat. This tour was soon followed by a self-booked UK tour in March to coincide with the release of their debut EP, On The March. The band then performed at events like Morcambe's Wasted Festival and shows with The Planet Smashers, Adequate Seven, Sonic Boom Six, Bad Manners, The Beat, Skindred and Babar Luck. The latter teamed up with the band in the studio to record two tracks.


The band began to be represented by Hidden Talent Booking in 2006. This saw Random Hand playing shows on Adequate Seven's final tour, Lightyear's reunion tour and the Three Way Dance with Sonic Boom Six, Failsafe and Crazy Arm, before heading to the studio to record their debut album Change of Plan. The record was released on Riot Music on 7 May 2007.


Following the release, the band toured with Voodoo Glow Skulls, Grown at Home, The JB Conspiracy and Left Alone, and played at the festivals City Invasion, Rebellion and Leeds Festival. Songs from the album received regular play on the Mike Davies Show and were played on the Steve Lamacq Show, and the band recorded a session at Maida Vale Studios for the BBC Radio 1 Punk Show in late 2007. Their songs also appeared on several cover CDs for Big Cheese Magazine. In September 2007 Random Hand signed to independent music publisher Bomber Music.


2008 started with the band's first headline tour of the UK, with 20 dates across the UK. The band then joined Voodoo Glow Skulls on their 2008 west coast United States tour. 2008 also saw performances at several festivals in the UK, in April at City Invasion in Bolton and London, and at the end of May as part of their tour with Sonic Boom Six and Big D and the Kids Table, and at Dunk Fest, Strummercamp and in August at Rebellion. The band appeared at the 2008 Reading and Leeds Festival on the Lock-Up stage.


This article uses material from the Wikipedia article "Random Hand", which is released under the Creative Commons Attribution-Share-Alike License 3.0.