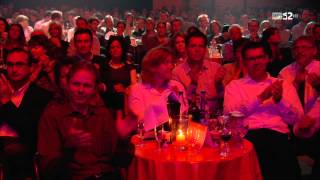 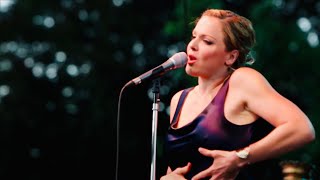 Pink Martini is an American band that was founded in 1994 by pianist Thomas Lauderdale in Portland, Oregon. Group members call it a little orchestra that crosses several styles, such as classical, latin, traditional pop, and jazz. The co-lead vocalists of Pink Martini are China Forbes and Storm Large.


Thomas Lauderdale has worked in politics since his years in high school in his hometown of Portland, Oregon. He considered the music at most fundraisers loud and boring. So as a remedy he founded the band Pink Martini in 1994, crossing genres such as classical, latin, traditional pop, and jazz to appeal to a broad audience. During the following year, he called China Forbes, one of his colleagues from Harvard University, and invited her to join the band. Their first single, Sympathique, was released in 1997 and was nominated as "Song of the Year" at the "Victoires de la Musique Awards" in France.


Forbes is monolingual but sings in 15 languages. "All of us in Pink Martini have studied different languages as well as different styles of music from different parts of the world", says Lauderdale. "So inevitably, our repertoire is wildly diverse. At one moment, you feel like you're in the middle of a samba parade in Rio de Janeiro, and in the next moment, you're in a French music hall of the 1930s or in a Palazzo in Napoli. It's a bit like an urban musical travelogue. We're very much an American band, but we spend a lot of time abroad and therefore have the incredible diplomatic opportunity to represent a broader, more inclusive America… the America which remains the most heterogeneously populated country in the world… composed of people of every country, every language, every religion". Featuring 10–12 musicians, Pink Martini performs its multilingual repertoire on concert stages and with symphony orchestras throughout the world.


Pink Martini made its European debut at the Cannes Film Festival in 1997 and its orchestral debut in 1998 with the Oregon Symphony under the direction of Norman Leyden. Since then, the band has gone on to play with more than 50 orchestras around the world, including multiple engagements with the Los Angeles Philharmonic at the Hollywood Bowl, the Boston Pops, the National Symphony at the Kennedy Center, the San Francisco Symphony, and the BBC Concert Orchestra at Royal Albert Hall in London.


Other appearances include the grand opening of the Los Angeles Philharmonic's Frank Gehry-designed Walt Disney Concert Hall, with return sold-out engagements for New Year's Eve 2003, 2004, 2008 and 2011; two sold-out concerts at Carnegie Hall; the opening party of the remodeled Museum of Modern Art in New York City; the Governor's Ball at the 80th Annual Academy Awards in 2008; the opening of the 2008 Sydney Festival in Australia; two sold-out concerts at Paris' legendary L'Olympia Theatre in 2011; and Paris' fashion house Lanvin's 10-year anniversary celebration for designer Alber Elbaz in 2012. In its twentieth year, Pink Martini was inducted into both the Hollywood Bowl Hall of Fame and the Oregon Music Hall of Fame. Pink Martini performed with the Eugene Ballet in 2006 and 2018.


On New Year's Eve 2005, Pink Martini performed live at the Arlene Schnitzer Concert Hall in Portland, Oregon. This performance was aired live on National Public Radio's Toast of the Nation, and in partnership with Oregon Public Broadcasting was recorded for a live DVD and later broadcast on US public broadcasting and French television. The DVD has been re-released to retail as Discover the World: Live in Concert, featuring not only the full concert, but several vignettes and a short documentary of the band's history.


This article uses material from the Wikipedia article "Pink Martini", which is released under the Creative Commons Attribution-Share-Alike License 3.0.