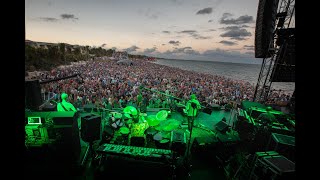 Phish is an American rock band that formed in Burlington, Vermont, in 1983. The band is known for musical improvisation, extended jams, blending of genres, and a dedicated fan base. The band consists of guitarist Trey Anastasio, bassist Mike Gordon, drummer Jon Fishman, and keyboardist Page McConnell, all of whom perform vocals, with Anastasio being the primary lead vocalist.


The band was formed by Anastasio, Gordon, Fishman and guitarist Jeff Holdsworth, who were joined by McConnell in 1985. Holdsworth departed the band in 1986, and the lineup has remained stable since. Phish began to perform outside of New England in the late 1980s and experienced a rise in popularity in the mid 1990s. In October 2000, the band began a two-year hiatus that ended in December 2002, but they disbanded again in August 2004. Phish reunited officially in October 2008 for subsequent reunion shows in March 2009 and since then have resumed performing regularly. All four members pursued solo careers or performed with side-projects and these projects have continued even after the band has reunited.


Phish's music blends elements of a wide variety of genres, including funk, progressive rock, psychedelic rock, folk, country, jazz, blues, bluegrass, and pop. The band is part of a movement of improvisational rock groups, inspired by the Grateful Dead and colloquially known as "jam bands", that gained considerable popularity as touring concert acts in the 1990s. Phish has developed a large and dedicated following by word of mouth, the exchange of live recordings, and selling over 8 million albums and DVDs in the United States.


Phish were signed to major label Elektra Records from 1991 to 2005, when the band formed their own independent label, JEMP Records, to release archival CD and DVD sets. The label's first release was Phish: New Year's Eve 1995 – Live at Madison Square Garden, which was released in conjunction with Rhino Records in December 2005. The label subsequently released several other archival live box sets, including band's new studio albums since its reunion as an active band.


Phish was formed at the University of Vermont in 1983 by guitarists Trey Anastasio and Jeff Holdsworth, bassist Mike Gordon, and drummer Jon Fishman. Anastasio and Fishman had met that October, after Anastasio overheard Fishman playing drums in his dormitory room, and asked if he and Holdsworth could jam with him. Gordon met the trio shortly thereafter, having answered a want-ad for a bass guitarist that Anastasio had posted around the university.


The new group performed their first concert at Harris Millis Cafeteria at the University of Vermont on December 2, 1983, where they played a set of classic rock covers, including two songs by the Grateful Dead. The band performed one more concert in 1983, and then did not perform again for nearly a year, stemming from Anastasio's suspension from the university following a prank he had pulled with a friend. Anastasio returned to his hometown of Princeton, New Jersey following the prank, and reconnected with his childhood friend Tom Marshall; The duo began a songwriting collaboration and recorded material that would appear on the Bivouac Jaun demo tape. Marshall and Anastasio have subsequently composed the majority of Phish's original songs throughout their career. Anastasio returned to Burlington in late 1984, and resumed performing with Gordon, Holdsworth and Fishman; The quartet eventually named themselves Phish, and they played their first concert under that name on October 23 of that year. Anastasio designed the band's logo, which featured the group's name inside a stylized fish. The band's members have given several different origins for the name Phish. In Parke Puterbaugh's 2009 book Phish: The Biography, the origin is given as a variation on phshhhh, an onomatopoeia of the sound of a brush on a snare drum. In the 2004 official documentary Specimens of Beauty, Anastasio said the band was also named after Fishman, whose nickname is "Fish." In a 1996 interview, Fishman denied that the band was named after him, and said the onomatopoeic inspiration behind the name was the sound of an airplane taking off.


The band would collaborate with percussionist Marc Daubert, a friend of Anastasio's, in the fall of 1984. Daubert ceased performing with the band in early 1985. Keyboardist Page McConnell met Phish in early 1985, when he arranged for them to play a spring concert at Goddard College, the small university he attended in Plainfield, Vermont. He began performing with the band as a guest shortly thereafter, and made his live debut during the third set of their May 3, 1985 concert at UVM's Redstone Campus. In the summer of 1985, Phish went on a short hiatus while Anastasio and Fishman vacationed in Europe; during this time, McConnell offered to join the band permanently, and moved to Burlington to learn their repertoire from Gordon. McConnell officially joined Phish as a full-time band member in September 1985.


This article uses material from the Wikipedia article "Phish", which is released under the Creative Commons Attribution-Share-Alike License 3.0.