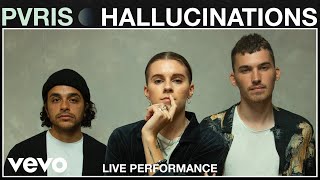 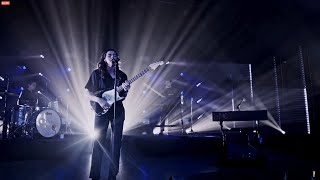 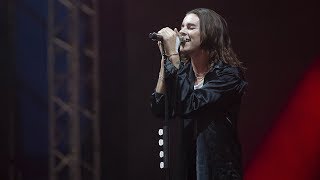 
Pvris is an American pop rock act formed by multi-instrumentalist, singer, songwriter, and producer Lyndsey Gunnulfsen. Over her decade-long career, Gunnulfsen has released three studio LPs: White Noise in November 2014 featuring the hits "You and I", and "My House", All We Know of Heaven, All We Need of Hell in 2017 featuring "What's Wrong", and Use Me in 2020 featuring "Hallucinations". In 2021, Pvris released their latest single via Warner Records.


The band was formed in Lowell, Massachusetts, in 2009 under the name Operation Guillotine. They were originally a metalcore band, consisting of five members, with Kyle Anthony performing lead vocals. Their line-up soon changed to vocalist/guitarist Lynn Gunn , guitarist Alex Babinski, bassist Brian Macdonald, and drummer Brad Griffin. On March 26, 2013, Pvris released their self-titled EP. The sound was described as post-hardcore. They played sporadic shows through the Spring, including a mini-tour with Love, Robot.


During the summer of 2013, the band played a week on Ernie Ball's Battle of the Bands stage at Warped Tour after winning a contest. On July 18, it was announced that they had signed with Tragic Hero Records, though it was short-lived. It was also during this time, on July 26, that the band officially changed their name from 'Paris' to 'Pvris', citing legal reasons. The band went on The Rise Up Tour supporting A Skylit Drive in September and October. Shortly after the end of the tour, they parted ways with their drummer Brad Griffin, and continued as a trio. Pvris began teasing fans that they would soon be hitting the studio to write and record new material around this time. That recording process began in December when Pvris entered the studio with Blake Harnage of Versa. On February 7, 2014, they officially announced that they were a part of an Acoustic 4 Way Split with A Loss For Words, Wind in Sails and After Tonight which was set to release on April 1, 2014. Coinciding with the release of their Acoustic EP, Pvris joined A Loss For Words, Veara, City Lights, and Moms on the fifth anniversary of The Kids Can't Lose Tour from March 29, 2014, to April 13, 2014.


When the band went into the studio their sound changed drastically, incorporating pop and electronic elements into their music. Gunn claimed this incorporation was done subconsciously. In June 2014 it was announced the band had signed to Rise and Velocity. A music video was released for "St. Patrick" on June 24, and the song was also released as a single on the same day. The track peaked at number 4 on the Kerrang! Rock Chart, spending over fifteen weeks in the top 20. In an interview with The Huffington Post Gunn elaborated on the excitement that came with being able to release new music to the public. "We've been waiting over six months to release anything... It feels incredible to finally unleash it to the world. So many more people are into it than we even imagined!" The band played two weeks on the Battle of the Bands stage at Warped Tour. During their time spent on Warped Tour The Huffington Post released a second article listing them as one of "18 Artists You Need To Know Halfway Through 2014". "Lynn Gunn is a force that cannot be denied, redolently poignant in both her most excitable and serene vocalizations. The first female-led signing of Rise Records, a label that has almost implausibly made metalcore music equally accessible and desirable, the label may have just made its smartest acquisition yet."


The band supported Mayday Parade in October and November on their The Honeymoon Tour. In early September, the band supported Emarosa on the Up Close and Personal tour. Pvris also joined the Ice Grills 2014 Tour in Japan from September 16, 2014, to September 21, 2014. The tour featured Lyndsey and Brian playing with A Loss For Words, State Champs, as well as Pvris providing acoustic support. On September 22, 2014, Pvris announced their debut album "White Noise" due for release on November 4, 2014. The following day, Pvris released a music video for "My House". On October 6, 2014, Pvris released "The Empty Room Sessions" of My House. On October 16, 2014, Pvris released the self-titled track "White Noise" off of their upcoming debut album. On November 10, 2014, it was announced that Pvris would be supporting Pierce the Veil and Sleeping with Sirens on the second leg of their World Tour, and Mallory Knox will also be supporting them. The tour runs from January 23 to March 4, starting in San Diego and ending in Oklahoma City. On March 25, 2015, Pvris released the official video for 'White Noise'.


On June 11, 2015, Pvris won the Relentless Kerrang! Awards 2015 for Best International Newcomer. On June 22, 2015, Pvris released their cover of "Chandelier" by Sia off Punk Goes Pop 6's deluxe edition. On July 2, 2015, Pvris released the official music video for "Holy". On July 21, 2015, Pvris released the official music video for "Fire". The following day, at the Alternative Press Music Awards, they took home the award for Breakthrough Band. The band supported Bring Me the Horizon in the U.S. in October, then supported them the following month in the UK. In February and March, the band supported Fall Out Boy on their tour of the U.S. On January 5, 2016, Pvris made their network television debut by performing "My House" and "White Noise" on Jimmy Kimmel Live!.


This article uses material from the Wikipedia article "PVRIS", which is released under the Creative Commons Attribution-Share-Alike License 3.0.