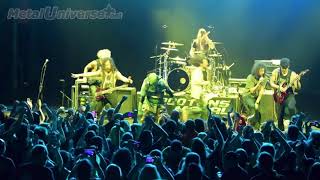 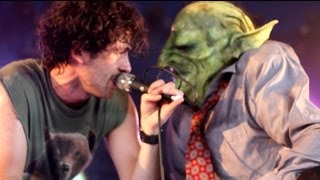 Nekrogoblikon is an American heavy metal band based in Los Angeles, California. The group was formed in 2006, by Tim Lyakhovetskiy and Nicky Calonne. The band has released four full-length albums, Goblin Island, Stench, Heavy Meta, and Welcome to Bonkers and one EP, Power. The band's music centers around goblins.


Nekrogoblikon was formed in 2006 by Nicky Calonne and Tim Lyakhovetskiy in Palo Alto, California. The two of them recorded Nekrogoblikon's first album, Goblin Island, in Lyakhovetskiy's basement. On his return to school at the University of California, Santa Barbara, Lyakhovetskiy found Ashleigh Carracino, Alex Duddy, Spencer Bartz, Alex Alereza, and Austin Nickel to form the rest of the band. The group played eleven shows before Bartz moved to Japan, and was replaced by Eddie Trager.


On July 19, 2011 the band released Stench. Stench was reviewed positively by "Pop and Hiss", the Los Angeles Times music blog, which praised its technical proficiency and songwriting, and described its inclusion of electronic elements as working "surprisingly well."Metal Sucks also praised the album with a 4.5/5 rating, describing it as more professional than Goblin Island, and complimenting its technicality.Blistering gave the album a 9/10 rating, calling it "fun and entertaining."


In September 2012 the band released a music video for "No One Survives," directed by Brandon Dermer. The video depicts a goblin who tries, and fails, to win the affections of a coworker . The video became a viral hit and was viewed more than 1.5 million times in the first 3 months.


In June 2013, Nekrogoblikon went on a European tour to perform at several venues and festivals, including Download Festival in England and Rock am Ring and Rock im Park in Germany.


In August 2013, Nekrogoblikon released an EP titled Power, produced by Nekrogoblikon and mixed by Matt Hyde. The album received a 2/5 review from Metal Sucks, which criticized the songwriting and described the band as a "lame joke."Sputnikmusic gave the album a 3.5/5 review, describing the album as "ridiculous," and praising the instrumentation and technicality but criticizing the vocals and inconsistency.


In 2014, Nekrogoblikon performed on the Kerrang! Tour, along with Limp Bizkit, Crossfaith, and HECK .


This article uses material from the Wikipedia article "Nekrogoblikon", which is released under the Creative Commons Attribution-Share-Alike License 3.0.