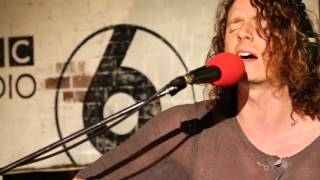 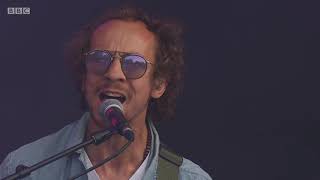 
The band's first line-up consisted of Blaine Harrison on drums, William Rees on guitar and Henry Harrison on bass. Henry became a second guitarist in the band and they were joined by Kai Fish on bass and Tamara Pearce-Higgins on the organ. Kai joined the band after suggestions that they needed a bassist . Their original name was The Misery Jets, which was taken from an Evening Standard headline . It got changed to Mystery Jets when Blaine accidentally misspelled the name while painting it on a drum skin.


The band at this time recorded an eponymous EP with Aswad producer Nick Sykes. They would practise in the boat shed built by Henry on land he bought after a hippie commune on Eel Pie Island burnt down. Blaine ) took lead vocals. Tamara left the band, and Blaine switched from drums to keyboards. The band had a brief stint with a friend of Williams' on drums, but he was unreliable and for a time a drum machine was used. The band advertised on internet message boards for a drummer and found Kapil Trivedi. Kapil is not from Eel Pie Island like the rest of the members, but rather Wembley, North London. He found out about the band through his drum teacher. Mystery Jets draws influences from Hall and Oates,Syd Barrett, and Pink Floyd. William Rees has named Robert Fripp, Adrian Belew, Jimi Hendrix, and David Bowie as his guitar inspirations. Much attention has been drawn to their hosting of a series of parties, dubbed "The White Cross Revival", on Eel Pie Island.


The Eel Pie Island EP was recorded soon after by a young producer called Bishop Dante at Rooster studios. The band issued its first proper single, a limited edition 7" of "Zoo Time", on Transgressive Records. Mystery Jets ran a series of illegal parties on Eel Pie Island, attracting large crowds, before being shut down by the police. They went on to sign to 679 Recordings. After 2005 saw a number of singles and their TV debut on MTV Two's Spanking New Music Week. The start of 2006 saw the band gain their highest charting single with "The Boy Who Ran Away", play the ShockWaves NME Awards Tour and make their first appearance on Top of the Pops.


The band's debut UK album, Making Dens, was released on 6 March 2006. On 18 September 2006, the band put on a tribute show to Syd Barrett, one of their biggest influences. The show was put on at the Union Chapel in Islington, London. Performers were Kid Harpoon, Lupen Crook, Kate Nash, Dan Treacy and the Television Personalities, Drew from Babyshambles, Ben from SixToes, Lucas from the Cazals and Mystery Jets. The groups created a special fanzine made for the show with entries from all the performers and artwork by the bands.


This article uses material from the Wikipedia article "Mystery Jets", which is released under the Creative Commons Attribution-Share-Alike License 3.0.