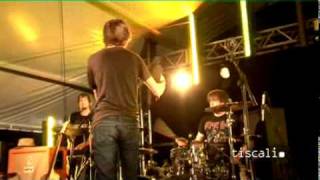 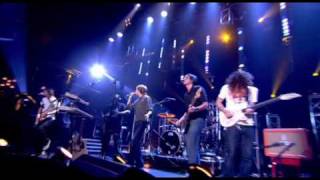 
Mumm-Ra are an English indie rock band, formed in Bexhill on Sea in the early 2000s. The bands name is borrowed from the 1980's cartoon, ThunderCats, whose main villain is named Mumm-Ra the Ever-Living. The group consists of vocalist, keyboard player, and occasional guitarist James New, guitarists James Arguile and Oli Frost, bassist Niall Buckler, and drummer Gareth Jennings. Keyboard player Tommy Bowen joined in 2006 as a touring member, before being made a fully fledged member in their 2012 reunion.


The band have released one studio album, These Things Move in Threes in 2007, which spawned the singles "Out of the Question", "What Would Steve Do?" and "She's Got You High". After going on hiatus in 2008, the band reunited for a series of live shows in 2012, as well as releasing an EP of material originally intended for their second album, Back to the Shore in 2014, spawning the singles "Technicolour" and "Jeremy". After another period of inactivity, the band again reunited in 2019 for further shows, a compilation album titled Rarities and a new single, "Summer" in 2020.


The band formed whilst in school in their native Bexhill-on-Sea, starting out as more of a hobby than a serious project. Throughout their early years, the bands lineup changed quite frequently, with one of the incarnations featuring sitar player Carl Gent, pianist Rory Cole and Pete Questier on mandolin. The core group of James New, James Arguile, Oli Frost, Niall Buckler and Gareth Jennings remained the constant. After releasing various demos, the band members made the decision not to go to university, but instead concentrate on the band.


After sending their demo round to various indie labels, Mike Pickering of label Deltasonic it on to Columbia Records, who were quick to sign the group. Their debut single "What Would Steve Do?" released in April 2006, followed by their EP Black Hurts Day and the Night Rolls On in July helped the band gain exposure, being "hotly tipped" by music magazine, NME.


In the build up to releasing their debut, the band embarked on several UK tours in 2006, as well as playing Oxegen Festival, Reading and Leeds Festival, T in the Park, Latitude Festival and Fuji Rock Festival. This continued, as the band opened for The Automatic on the 2007 NME Awards Tour along with The View and The Horrors.


The band released their debut album, These Things Move In Threes on 28 May 2007 proceeded by singles "Out of the Question" and followed by "She's Got You High".


This article uses material from the Wikipedia article "Mumm-Ra", which is released under the Creative Commons Attribution-Share-Alike License 3.0.