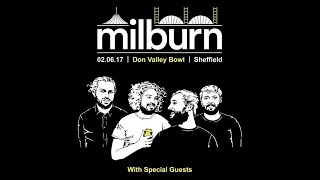 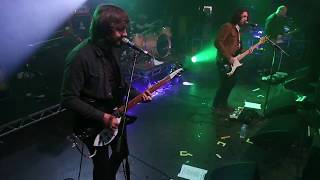 
Milburn are an indie rock band from Sheffield, England, that consisted of Joe Carnall, Louis Carnall, Tom Rowley, and Joe Green. They announced their split on 28 March 2008, with the band playing one final gig at Sheffield's Carling Academy on 24 May 2008 before reuniting in 2016.


Milburn's formation came after years of friendship through playing football together. Joe Green started playing the drums and Tom and Louis Carnall both learned to play guitar. The three then decided to form a band, in which they would play cover versions of songs by bands they admired. However the band required a singer and bass player, so they encouraged Louis Carnall's younger brother Joe Carnall to join, despite him not knowing how to sing or play bass. It was a good idea.


Milburn started out playing small gigs in front of friends, practising at drummer Joe Green's grandma's house. The origin of their name comes from a bet with a friend whose surname was Milburn.


The band released their first demo in 2001, titled "Steel Town". The demo was handed out at gigs and to anyone interested in listening. The demo's artwork was simply the band's name in front of the colours blue and white, representing their love for local football team Sheffield Wednesday. The demo contained three tracks, "Steel Town", "High & Dry" and "Tommy".


In 2002 Milburn sold out the Boardwalk in Sheffield twice and played at The Cavern Club in Liverpool, The Garage in London and The Leadmill in Sheffield, while supporting Tony Wright's band Laika Dog and Cosmic Rough Riders.


After releasing two limited singles, "Lipstick Lickin" and "Showroom", on their own label Free Construction, Milburn signed to Mercury Records in 2006. Their debut single for the label, "Send In the Boys", reached number 22 in the UK Singles Chart in April 2006, and their debut album, Well Well Well, released on 9 October 2006 on Mercury Records reached number 32 in the UK Albums Chart.


This article uses material from the Wikipedia article "Milburn", which is released under the Creative Commons Attribution-Share-Alike License 3.0.