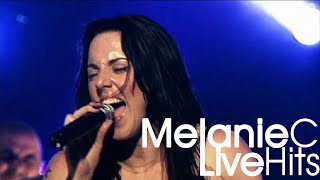 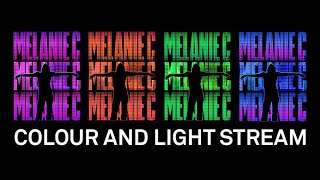 
Melanie Jayne Chisholm , better known as Melanie C or Mel C, is an English singer, best known as one of the five members of the Spice Girls, during which time she was nicknamed Sporty Spice.


She rose to fame in 1996, releasing, in two years with the Spice Girls, two consecutive number-one albums, eight number-one singles from nine worldwide hits, the biggest-selling debut single of all time and the biggest-selling album in music history by a girl group, respectively with "Wannabe" atop in 37 countries with over seven million records, and Spice, which peaked at number one in more than 17 countries across the world, with over 31 million copies, as well as the second album Spiceworld with more than 20 million copies sold. Melanie C is known for her unique vocal prowess that helped shoot the Spice Girls to international stardom. Chisholm began her solo career in late 1998 by singing with Canadian rock singer Bryan Adams, and her solo debut album Northern Star was released in 1999, reaching number one in Sweden and number 4 on the UK Albums Chart. It was certified internationally with seven platinum and three gold certifications, including the triple-Platinum by the British Phonographic Industry, selling over 4 million copies worldwide, and becoming the best selling solo album of any Spice Girls member.


After her second album, gold certified in UK, Reason, with more than 500,000 copies, Chisholm, in 2004, parted from Virgin and founded her own record company, Red Girl Records. Beautiful Intentions, her third album, in 2005, spent 9 weeks at number one in Portugal and spawned international hit singles, selling over 1.5 million copies worldwide with several international certifications. The fourth studio album, This Time, was released in 2007, became her first top 10 album in Switzerland where was certified gold. Of the five singles released from the album, the first three went to number one in Portugal. In December, Chisholm reunited with the Spice Girls to release a greatest hits album supported by a world tour. She released her fifth solo album, The Sea, in 2011, her first EP The Night in 2012, the sixth studio album Stages, in 2012, and seventh album, Version of Me . Her eponymous eighth studio album was released in 2020.


Since 1996, Chisholm has sold more than 123 million records, including 100 million copies with the group, and 23 million solo albums, singles and collaborations, and has earned over 326 worldwide certifications , including 41 silver, gold and platinum certifications as a solo artist.


Melanie Jayne Chisholm was born on 12 January 1974 in Whiston, Lancashire, the only daughter of Joan O'Neill, who worked as a secretary and personal assistant and has been singing in music bands since she was 14, and Alan Chisholm, a fitter at the Otis Elevator Company. Her parents married in 1971 and separated in 1978, when Chisholm was four years old. Her mother remarried and had more children, one of whom is racing driver Paul O'Neill, who was born when Chisholm was six years old. She grew up in Widnes, Cheshire, attending Brookvale Junior School in nearby Runcorn and Fairfield High School in Widnes. Following school, she studied for a diploma course in dance, singing, drama, and musical theatre at the Doreen Bird College of Performing Arts in London. During college, she replied to an advert in The Stage placed by Chris and Bob Herbert, who were looking to form a new girl group, later to become the Spice Girls. She left college just short of completing her three-year course, and gained teaching qualifications in tap and modern theatre dance with the Imperial Society of Teachers of Dancing.


This article uses material from the Wikipedia article "Melanie C", which is released under the Creative Commons Attribution-Share-Alike License 3.0.