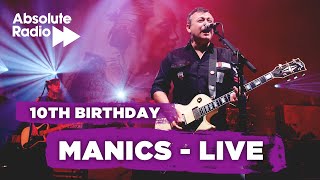 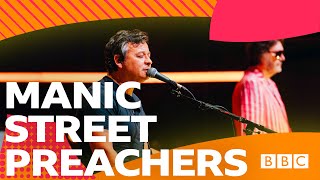 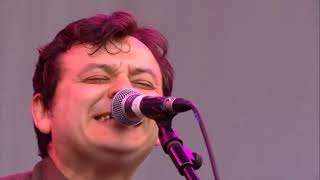 
Manic Street Preachers are a Welsh rock band formed in Blackwood in 1986. The band consists of cousins James Dean Bradfield and Sean Moore , plus Nicky Wire . They are often colloquially known as "the Manics". They form a key part of the 1990s Welsh Cool Cymru cultural movement.


Following the release of their debut single "Suicide Alley", Manic Street Preachers were joined by Richey Edwards as co-lyricist and rhythm guitarist. The band's early albums were in a punk vein, eventually broadening to a greater alternative rock sound, whilst retaining a leftist political outlook. Their early combination of androgynous glam imagery and lyrics about "culture, alienation, boredom and despair" gained them a loyal following.


Manic Street Preachers released their debut album, Generation Terrorists, in February 1992, followed by Gold Against The Soul in 1993 and The Holy Bible and 1994. Edwards disappeared in February 1995, and was legally presumed dead in 2008. The band achieved commercial success with the albums Everything Must Go and This Is My Truth Tell Me Yours .


The Manics have headlined festivals including Glastonbury, T in the Park, V Festival and Reading. They have won eleven NME Awards, eight Q Awards and four BRIT Awards. They were nominated for the Mercury Prize in 1996 and 1999, and have had one nomination for the MTV Europe Music Awards. They have reached number 1 in the UK charts four times: in 1998, with This Is My Truth Tell Me Yours and the single "If You Tolerate This Your Children Will Be Next", in 2000 with the single "The Masses Against the Classes", and in 2021 with The Ultra Vivid Lament. They have sold more than ten million albums worldwide.


Manic Street Preachers formed in 1986 at Oakdale Comprehensive School, Blackwood, South Wales, which all the band members attended. Bradfield and the slightly older Moore are cousins, and shared bunk beds in the Bradfield family home after Moore's parents divorced.


During the band's early years, Bradfield, alongside the classically trained Moore, primarily wrote the music while Wire focused on the lyrics. The origin of the band's name remains unclear, but the most often-told story relates that Bradfield while busking one day in Cardiff, got into an altercation with someone who asked him "What are you, boyo, some kind of manic street preacher?"


This article uses material from the Wikipedia article "Manic Street Preachers", which is released under the Creative Commons Attribution-Share-Alike License 3.0.