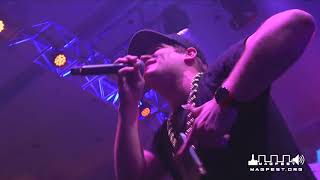 Andrew Robert Nielsen , known professionally as MC Lars, is an American record producer, rapper, cartoonist, podcaster and educator. Lars is one of the self-proclaimed originators of "lit-hop", and is the founder and CEO of the independent record label Horris Records. Lars has been cited as the creator of the term "iGeneration", which he was credited with doing in 2003.


In 2006, he released the single "Download This Song", which entered the Australian Singles Chart at number 29.


In 2006, Lars worked with the Canadian independent record label Nettwerk Records to release The Graduate. Following this release, Lars toured extensively throughout the US, then he toured UK and did shows in Japan, and Australia. Not long after the album was released on iTunes, Lars received an e-mail from a 15-year-old fan Elisa Greubel on his web forum saying she identified with "Download This Song" since her family was one of many being sued by the Recording Industry Association of America. This led to Nettwerk executive Terry McBride and a team of major-label artists managed by Nettwerk to support the Greubels with their case. MC Lars returned to the UK in October 2006.


In April 2007, MC Lars and Nettwerk made the component tracks for his single "White Kids Aren't Hyphy" available for remix under a by-nc-sa Creative Commons license on the Jamglue online mixing site as a contest. In May, MC Lars toured the UK on the third installment of the Good To Go Tour, making friends with Wheatus front man Brendan B. Brown. In July Lars and Brown recorded new songs, two of which would later appear on This Gigantic Robot Kills. In November, Lars returned to the UK on tour with pop-punk band Last Letter Read who performed their own set and then on stage with Lars, debuting Lars' new song "Hey There Ophelia".


This article uses material from the Wikipedia article "MC Lars", which is released under the Creative Commons Attribution-Share-Alike License 3.0.