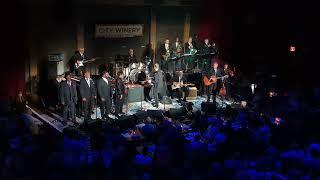 
Lyle Pearce Lovett is an American singer, songwriter, actor and record producer. Active since 1980, he has recorded 13 albums and released 25 singles to date, including his highest entry, the number 10 chart hit on the U.S. Billboard Hot Country Songs chart, "Cowboy Man". Lovett has won four Grammy Awards, including Best Male Country Vocal Performance and Best Country Album. His most recent album is 12th of June, released in 2022.


Lovett was born in Houston, Texas, when his family lived in the nearby community of Klein. He is the son of William Pearce and Bernell Louise Lovett, a marketing executive and training specialist, respectively. He was raised in the Lutheran Church–Missouri Synod. Lovett attended Texas A&M University, where he received Bachelor of Arts degrees in both German and Journalism in 1980. In the early 1980s, Lovett often played solo acoustic sets at the small bars just off the A&M campus.


Lovett began his music career as a singer-songwriter. By the early 1980s, Lovett had already distinguished himself in the burgeoning Texas folk acoustic scene. He had performed in the New Folk competition at the Kerrville Folk Festival in 1980 and 1982. An American singer, Buffalo Wayne, whom he had met in 1978 during a college trip to Germany, invited Lovett to play with him at the 1983 Schueberfouer in Luxembourg. One of the events at the funfair was an American musical tent. The owner of that event was a fan of the Phoenix, Arizona, house band J. David Sloan and the Rogues. He invited the Rogues for the event, and Lovett was encouraged by band members Ray Herndon and Matt Rollings to sit in with the group, which did some of his songs. They opened his eyes to what his songs could sound like with proper backing; Lovett had never sung with a band before. Sloan and band member Billy Williams offered Lovett a deal on studio time, first day free. In 1984 Lovett took them up on the offer. After several stays in Arizona over that summer he recorded 18 songs. The demo tape of the first four songs led to his first record deal; ten of those songs, recorded with the Rogues, became Lovett's self-titled debut album. He made many longtime contacts in Arizona during that time. Several of the Rogue players, Herndon, Matt McKenzie, Rollings, and Williams, went on to play in his band. Williams produced or co-produced several of his albums from 1987 to 2007. Through them he met Francine Reed, who began recording with him in 1985 and toured with him for decades. In 2022, reliving his Phoenix connection:


It led to a demo tape, an album and now, this rolling Thanksgiving tour...It's all because of running into this band in Luxembourg. That's a long way to get to Phoenix from Texas. It's a lot shorter if you just do I–10


He signed with MCA Records in 1986 and released his eponymous debut album. He sang harmony vocals on Nanci Griffith's The Last of the True Believers album . While typically associated with the country genre, Lovett's compositions often incorporate folk, swing, blues, jazz and gospel music as well as more traditional country & western styling. He has won four Grammy Awards, including Best Country Album , Best Country Duo/Group with Vocal , Best Pop Vocal Collaboration and Best Country Male Vocal . In 1995, Lovett performed a duet of "You've Got a Friend in Me" with Randy Newman for Toy Story. He plays Collings acoustic guitars.


Lovett has acted in a number of films, notably four for director Robert Altman: The Player , Short Cuts , Prêt-à-Porter , and Cookie's Fortune . He also composed the score for the director's Dr. T & the Women . Some of his other film roles include Bastard Out Of Carolina , The New Guy , Walk Hard: The Dewey Cox Story , and a humorous role in Angels Sing, a family Christmas movie . His television acting forays include guest roles on Mad About You and Castle, a recurring role on The Bridge , and appearances as himself on Dharma & Greg and Brothers & Sisters.


This article uses material from the Wikipedia article "Lyle Lovett", which is released under the Creative Commons Attribution-Share-Alike License 3.0.