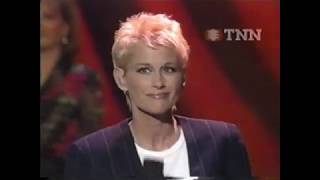 Lorrie Morgan - Something in Red | Live at the Grand Ole Opry


Loretta Lynn Morgan is an American country music singer. She is the daughter of George Morgan, widow of Keith Whitley, and ex-wife of Jon Randall and Sammy Kershaw, all of whom are also country music singers. Morgan has been active as a singer since the age of 13, and charted her first single in 1979. She achieved her greatest success between 1988 and 1999, recording for RCA Records Nashville and the defunct BNA Records. Her first two RCA albums and her BNA album Watch Me are all certified platinum by the Recording Industry Association of America . The 1995 compilation Reflections: Greatest Hits is her best-selling album with a double-platinum certification; War Paint, Greater Need, and Shakin' Things Up, also on BNA, are certified gold.


Morgan has made more than forty chart entries on the Billboard Hot Country Songs charts, including three number-one singles: "Five Minutes", "What Part of No", and "I Didn't Know My Own Strength", and eleven additional top-ten hits. Morgan has recorded in collaboration with her father, as well as Whitley, Randall, Kershaw, Frank Sinatra, Johnny Mathis, Tammy Wynette, The Beach Boys, Dolly Parton, Andy Williams, the New World Philharmonic, and Pam Tillis. She is also a member of the Grand Ole Opry. Morgan's musical style is defined largely by country pop influences and her dramatic singing voice, with frequent stylistic comparisons to Tammy Wynette.


Loretta Lynn Morgan was born in Nashville, Tennessee, on June 27, 1959. She is the fifth child of country music singer George Morgan. Her mother was Anastasia "Anna" Paridon Trainor, who died in 2018. At age 13, Lorrie Morgan made her first performance on the Grand Ole Opry, when her father brought her onstage to perform "Paper Roses". According to Morgan herself, the performance received a standing ovation. Morgan's father died in 1975, so she and the members of his band toured various small clubs until 1977, when they disbanded and she began touring with Roy Wiggins. After this, she worked as a receptionist, songwriter, and demo singer for Acuff-Rose Music.


Morgan's employment at Acuff-Rose led to her signing with that company's Hickory Records label, which issued two singles in 1979: "Two People in Love" and "Tell Me I'm Only Dreaming," written by Eddy Raven and Liz Anderson, respectively. Both singles made the lower regions of the Hot Country Songs charts that year. Another single, "I'm Completely Satisfied with You", featured electronically overdubbed vocals of her father. It also made the charts by year's end. During the early 1980s, Morgan continued to tour primarily in night clubs, and served as an opening act for Billy ThunderKloud & the Chieftones, Jeannie Seely, and Jack Greene, among others. She also toured as a backing vocalist for George Jones, made guest appearances on the television series Nashville Now, and in 1984 became the youngest inductee of the Grand Ole Opry. The same year she issued two singles on MCA Records: "Don't Go Changing," which reached the lower regions of Hot Country Songs, and "If You Came Back Tonight," which did not chart.


Morgan signed to RCA Records Nashville in 1988 and released her first single for that label, "Trainwreck of Emotion", that year. The song reached number 20 on the Hot Country Songs chart and served as the lead single to her debut album Leave the Light On. Following this were "Dear Me" and "Out of Your Shoes"; these both went top ten on Hot Country Songs, with the latter also reaching the number-one position on the Radio & Records country charts in December 1989. After this song came "Five Minutes", her first number one on Hot Country Songs, and then another top ten in "He Talks to Me".Barry Beckett was the album's producer, and contributing songwriters included Mike Reid, Jon Vezner, and Beth Nielsen Chapman. Following the album's last single, RCA also issued "'Til a Tear Becomes a Rose", a duet between Morgan and Keith Whitley from the latter's Greatest Hits album. The song would later win Vocal Event of the Year from the Country Music Association. Thom Owens of AllMusic reviewed Leave the Light On favorably, calling it "a skilled and assured blend of traditional country, honky tonk, country-rock and modern pop sensibilities that pointed the direction toward the sound, style and musical eclecticism of '90s contemporary country."The Chicago Tribune writer Jack Hurst rated the album four out of four stars, referring to it as "fine, well-produced songs and a compelling performer". In 1993, Leave the Light On earned a platinum certification from the Recording Industry Association of America for shipments of one million copies.


Her second RCA album Something in Red came out in 1991. Also certified platinum by the RIAA, it accounted for four Hot Country Songs entries between then and early 1992: "We Both Walk", a cover of George Jones' "A Picture of Me ", and "Except for Monday" all reached top ten, while title track reached number fourteen in early 1992. The album also included a duet with Dolly Parton titled "Best Woman Wins", which also appeared on the latter's 1992 album Eagle When She Flies.Richard Landis produced the album except for the duet, which Parton produced with Steve Buckingham and Gary Smith. Contributing songwriters included Skip Ewing, Reed Nielsen, and Chris Waters.Brian Mansfield of AllMusic reviewed Something in Red favorably, noting that it had fewer "sad songs" than its predecessor while highlighting the "laidback country and ballads like the title track".


This article uses material from the Wikipedia article "Lorrie Morgan", which is released under the Creative Commons Attribution-Share-Alike License 3.0.