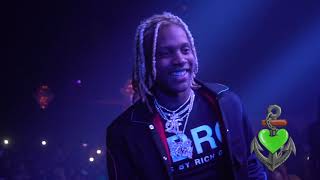 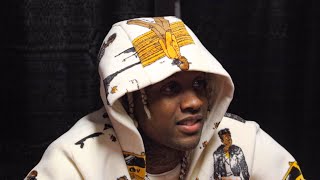 Durk Derrick Banks , better known by his stage name Lil Durk, is an American rapper, singer, and songwriter. He is the lead member and founder of his own collective and record label, Only the Family.


Lil Durk was born on October 19, 1992. Lil Durk had to shoulder much responsibility at a very young age because his father was incarcerated when he was 7 years old. Lil Durk recalled that there was time when he didn't have enough food in his home when he was younger. He started his first break through social media channels like Myspace and Youtube. He became more fond of the idea of being a rapper once his online fan base started to grow rapidly than expected. Lil Durk took his career more seriously after becoming a father at 17 and dropping out from high school. Lil Durk attended a Southside high-school by the name of Paul Robeson High School ultimately dropping out his senior year to be a part of the gang war in Chicago. Lil Durk joined the Black Disciples after dropping out of high school. Soon after joining he began to get into trouble with the law as well as served a bit of time. In October 2011, he was hit with gun charges, including possession of a firearm with a defaced serial number. He later pleaded guilty to a reduced charge of aggravated unauthorized use of a weapon, according to court records. In 2013 Lil Durk was also arrested again with a loaded .50 caliber handgun in Englewood on an early Wednesday morning after he threw the gun into his vehicle and locking it afterwards.Chicago Police gained a warrant to search the vehicle, found the loaded handgun, and arrested the rapper without incident.


In 2011, Banks would start taking music seriously. After plans to sign with Chief Keef and French Montana's labels fell through, he considered rapping as "a full-time career" after the releases of his two singles, "Sneak Dissin'" and "I'ma Hitta", each of which received generally positive feedback. On October 19, 2012, Durk released his third mixtape, Life Ain't No Joke. As of September 22, 2015, the mixtape has been downloaded over 216,000 times on DatPiff. In December 2012, Durk released the track, called "L's Anthem", which was remixed, featuring French Montana, as a re-release.


Due to the popularity of "L's Anthem" and its follow-up single, "Dis Ain't What U Want" in 2013, Durk accepted a joint venture deal with his collective Only the Family and Def Jam Recordings.


After a small number of delays, Durk's fourth mixtape Signed to the Streets was released on October 14, 2013, exclusively on DatPiff. It features two guest appearances from former Glo Gang affiliate Lil Reese, along with production credits from Paris Bueller and Young Chop, among others. Eight music videos were released to promote the mixtape: "Bars Pt. 2", "Oh My God", "100 Rounds", "Dis Ain't What U Want", "Bang Bros", "Traumatized", "Hittaz" and "Times". Signed to the Streets would later be named the eighth best mixtape of 2013 by Rolling Stone. On October 22, 2013, in an interview with XXL, Lil Durk said he was working on his debut album under Def Jam. Also, Durk was named part of the 2014 XXL Freshmen Class.


On July 7, 2014, Durk released his fifth mixtape, the sequel to Signed to the Streets.


On March 25, 2015, Durk announced the title of his debut studio album Remember My Name and revealed its original release date, May 12. On the same day, the album's first single, "Like Me", featuring Jeremih, was released.


This article uses material from the Wikipedia article "Lil Durk", which is released under the Creative Commons Attribution-Share-Alike License 3.0.