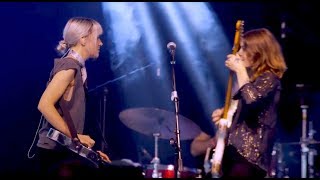 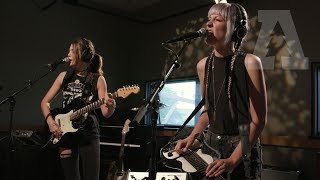 Larkin Poe is an American roots rock band originally from north Georgia and currently from Nashville, Tennessee fronted by sisters Rebecca Lovell and Megan Lovell . Featuring strong southern harmonies, heavy electric guitar riffs, and slide guitar, they are often touted as "the little sisters of the Allman Brothers". The band performed at the 2014 and 2016 Glastonbury Festival, and were voted "Best Discovery of Glastonbury 2014" by the UK's The Observer.


Both sisters have also toured as backing musicians for a variety of other bands, most notably Elvis Costello, Conor Oberst of Bright Eyes, Kristian Bush of Sugarland, and Keith Urban.


Rebecca & Megan Lovell began their musical careers in 2005 as teenagers with the formation of a bluegrass/Americana group, the Lovell Sisters, with their eldest sister, Jessica Lovell. After self-releasing two independent albums and touring successfully for four years - appearing on Garrison Keillor's A Prairie Home Companion, the Grand Ole Opry, and performing at Bonnaroo Music Festival - the Lovell Sisters announced the group's disbandment in December 2009. In January 2010, Rebecca and Megan regrouped as Larkin Poe. "Larkin Poe" was the name of the sisters' great-great-great-grandfather.


In June 2014, Larkin Poe performed at the Glastonbury Festival, which resulted in them being named "best discovery of Glastonbury" by The Observer.


This article uses material from the Wikipedia article "Larkin Poe", which is released under the Creative Commons Attribution-Share-Alike License 3.0.