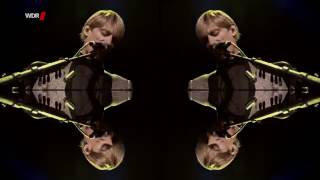 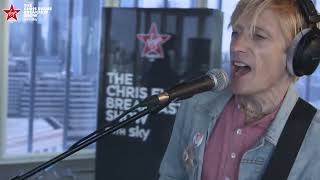 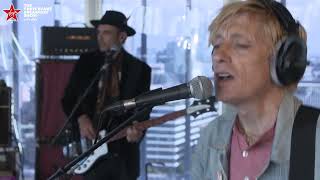 
Kula Shaker are an English psychedelic rock band. Led by frontman Crispian Mills, the band came to prominence during the Post-Britpop era of the late 1990s. The band enjoyed commercial success in the UK between 1996 and 1999, notching up a number of Top 10 hits on the UK Singles Chart, including "Tattva", "Hey Dude", "Govinda", "Hush", and "Sound of Drums". The band's debut album, K, reached No. 1 on the UK Albums Chart. It was voted number 879 in Colin Larkin's All Time Top 1000 Albums 3rd Edition .


The band are known for their interest in traditional Indian music, culture, and mysticism, with a number of their most famous songs, including "Tattva" and "Govinda", featuring lyrics written in Sanskrit. The name Kula Shaker was itself inspired by king Kulasekhara, an Indian king from the 9th century. In addition, many of the band's songs feature traditional Indian instruments, such as the sitar, tamboura, and tabla, juxtaposed with guitar-heavy, Western rock instrumentation. Despite achieving commercial success, Kula Shaker were unpopular with many critics, with The Observer's Simon Price describing them in 2014 as a "joke band".


Kula Shaker disbanded in September 1999 but reformed in 2004 for sessions for the School of Braja compilation album. This led to plans for a full comeback, although the reformation was not widely publicised until the beginning of 2006. The band's third album, Strangefolk, was issued in 2007 and their fourth, Pilgrims Progress, was released in 2010. The band returned with a mostly sold out European tour and new album K 2.0 in 2016 which was well-received both by the media and the fans.


After taking an extended hiatus, the band released their sixth album, 1st Congregational Church of Eternal Love and Free Hugs in June of 2022, which preceded a UK tour.


The origin of Kula Shaker can be traced back to 1988 when Crispian Mills and son of actress Hayley Mills and film director Roy Boulting) met Alonza Bevan at Richmond upon Thames College in South-West London. The two went on to play together in a band named Objects of Desire, formed later that year. The band's initial line-up consisted of Mills on lead guitar, Bevan on bass, Richard Cave on drums later Marcus French on drums, Leigh Morris on rhythm guitar, and Marcus Maclaine on lead vocals. In 1991, Paul Winterhart joined the band, replacing French on drums. During this period, Crispian and Alonza were also responsible for running the Mantra Shack, a psychedelic nightclub at the back of Richmond ice rink, and consequently, the Objects of Desire would often perform at the venue.


The Objects of Desire disbanded acrimoniously in early 1993, after which, Mills went on a spiritual pilgrimage, backpacking around India. The trip had a profound effect on the guitarist, fostering a deep interest in Indian culture and Hinduism. Upon returning to the UK he formed a new band named The Kays, with Bevan, Winterhart, and Mills' cousin Saul Dismont on vocals. The band's debut live performance was at the 1993 Glastonbury Festival. Within a year, Dismont had left the band, only to be replaced by organist Jay Darlington, who had previously been a member of several mod revival bands. After two years of touring and recording, The Kays elected to change their name and musical direction.


This article uses material from the Wikipedia article "Kula Shaker", which is released under the Creative Commons Attribution-Share-Alike License 3.0.