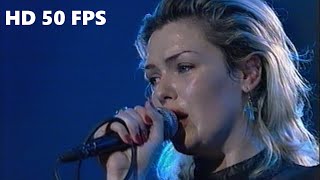 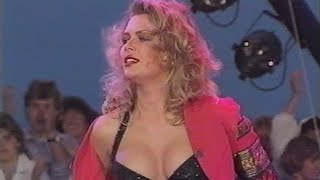 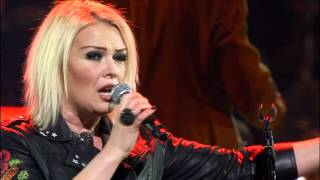 
Kim Wilde is an English pop singer, DJ and television presenter. She first saw success in 1981 with her debut single "Kids in America", which reached number two in the UK. In 1983, she received the Brit Award for Best British Female solo artist. In 1986, she had a UK number two hit with a reworked version of the Supremes' song "You Keep Me Hangin' On", which also topped the US Billboard Hot 100 in 1987. Between 1981 and 1996, she had 25 singles reach the Top 50 of the UK singles chart. Her other hits include "Chequered Love" , "You Came" and "Never Trust a Stranger" . In 2003, she collaborated with Nena on the song "Anyplace, Anywhere, Anytime", which topped the Dutch charts.


Worldwide, Wilde has sold over 10 million albums and 20 million singles. She holds the record for being the most-charted British female solo act of the 1980s, with seventeen UK Top 40 hit singles. Starting in 1998, while still active in music, she has branched into an alternative career as a landscape gardener, which has included presenting gardening shows on the BBC and Channel 4. In 2005, she won a Gold award for her courtyard garden at the Royal Horticultural Society’s Chelsea Flower Show.


The eldest child of 1950s rock 'n' roller Marty Wilde and Joyce Baker, who had been a member of the singing and dancing group the Vernons Girls, Kim Smith was born in the West London suburb of Chiswick and attended Oakfield Preparatory School, in the Southeast London area of Dulwich. When she was nine, the family moved to Hertfordshire, where she was educated at Tewin and later Presdales School. In 1980, at age 20, she completed a foundation course at St Albans College of Art & Design. As Kim Wilde, she was signed to RAK Records by Mickie Most.


Wilde's father Marty and brother, Ricky, were responsible for writing virtually all of her material in the early-to-mid 1980s. Key influences on the songwriting process included Orchestral Manoeuvres in the Dark , Ultravox, John Foxx, Gary Numan, Skids, Sex Pistols, the Clash, Kraftwerk and the Stranglers. Wilde released her debut single "Kids in America" in January 1981. An instant success, it reached number two in the UK Singles Chart and scaled the Top 5 in other countries such as Germany, France and Australia. Although it achieved only moderate success in the US, peaking at number 25 when released in 1982, it is often regarded today as Wilde's signature song. Her debut album Kim Wilde repeated the success of the single, spawning two further hits in "Chequered Love" and the UK-only single "Water on Glass" .


Wilde's follow-up album was 1982's Select, led by the hit singles "Cambodia" and "View from a Bridge". Both were number 1 hits in France and reached Top 10 positions in Germany and Australia. At the time, there was some controversy about Wilde's hesitation to do live concerts. Her first concerts in September 1982 took place in Denmark, before embarking on a UK-wide tour in October. Wilde's third album, Catch as Catch Can was a relative failure. The first single from the album, "Love Blonde", was another success in France and Scandinavia, but failed to have major success in other countries. The failure of the album led to her leaving RAK and signing with MCA Records in the summer of 1984.


Wilde's first MCA album Teases & Dares was again overlooked in her home country, but fared better in Germany, France and Scandinavia as well as scoring another German Top 10 single with "The Second Time" . The video for this song appeared in an episode of the 1980s TV hit Knight Rider in 1985. The second single, "The Touch", was not a commercial success, but the third single, the rockabilly "Rage to Love", made the UK top 20 in 1985. On Teases & Dares, Wilde made her first songwriting contributions, penning two songs. Meanwhile, she had embarked on three European concert tours .


This article uses material from the Wikipedia article "Kim Wilde", which is released under the Creative Commons Attribution-Share-Alike License 3.0.