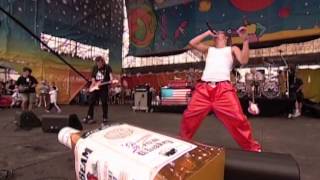 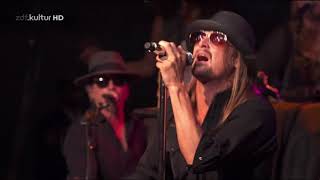 
Robert James Ritchie , known professionally as Kid Rock , is an American singer, songwriter and rapper. His style alternates between rock, hip hop, country, and heavy metal. A self-taught musician, he plays every instrument in his backing band and has overseen production on all but two of his albums.


Kid Rock started his music career as a rapper and DJ, releasing his debut album Grits Sandwiches for Breakfast on Jive Records. His subsequent independent releases The Polyfuze Method and Early Mornin' Stoned Pimp saw him developing a more distinctive style, which was fully realized on his breakthrough album Devil Without a Cause , which sold 14 million copies. This album and its follow-up, Cocky , were noted for blending elements of hip hop, country, rock and heavy metal. His most successful single from that period, "Cowboy" , is considered a pioneering song in the country rap genre. His best-selling singles overall are "Picture" and "All Summer Long" . Starting with his 2007 album Rock n Roll Jesus, his musical output has tended to be in the country and rock styles.


Kid Rock was born Robert James Ritchie in Romeo, Michigan, on January 17, 1971, the son of Susan and William Ritchie, who owned multiple car dealerships. He was raised in his father's 5,628-square-foot home on a 6-acre property, where he regularly helped his family pick apples and care for their horses. His younger sister, Jill Ritchie, is an actress. In the 1980s, he became interested in hip hop, began to breakdance, and taught himself how to rap and DJ while performing in talent shows in and around Detroit.


Kid Rock began his professional music career as a member of a hip hop music group called The Beast Crew in the late 1980s. During this time, he met rapper D-Nice. That relationship would eventually lead to him becoming the opening act at local shows for Boogie Down Productions.


During this time, Kid Rock began a professional association with producer Mike E. Clark, who, after some initial skepticism with the idea of a "white" rapper, found himself impressed with Kid Rock's energetic and well-received performance where the artist, using his own turntables and equipment, actually prepared his own beats to demonstrate his skills for Clark.


In 1988, Clark produced a series of demos with Kid Rock and that eventually led to offers from six major record labels, including Atlantic and CBS Records.


This article uses material from the Wikipedia article "Kid Rock", which is released under the Creative Commons Attribution-Share-Alike License 3.0.