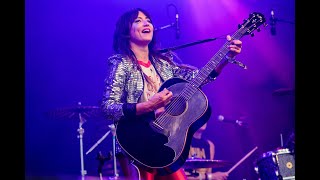 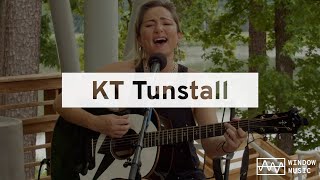 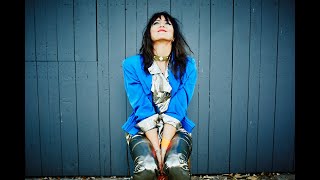 
Kate Victoria "KT" Tunstall is a Scottish singer-songwriter and musician. She first gained attention with a 2004 live solo performance of her song "Black Horse and the Cherry Tree" on Later... with Jools Holland.


She has released seven albums internationally: Eye to the Telescope , Drastic Fantastic , Tiger Suit , Invisible Empire // Crescent Moon , Kin , Wax and Nut . She has also appeared in two episodes of the comedy series This is Jinsy on Sky Atlantic.


Tunstall has written music and songs for film soundtracks including "Boy" for The Kid, "Miracle" for Winter's Tale, "We Could Be Kings" for Million Dollar Arm; "Float", "Strange Sight" and "1000 Years" for Tinker Bell and the Legend of the NeverBeast; "Fit In" for About Ray; and "Bad Moms ", "Enough is Enough " and "Get Your Tits Up " for Bad Moms.


Tunstall was born to a half-Chinese, half-Scottish mother, Carol Anne , who was from Hong Kong, and an Irish father. Her parents met while her mother was working as a dancer in Penthouse bar in Edinburgh, where her father was a bartender. She never met her biological father. She was born at Edinburgh's Western General Hospital and at 18 days old, was placed for adoption by her mother with a family in St Andrews, Fife, Scotland. Her adoptive father, David Tunstall, was a physics lecturer at the University of St Andrews, and her adoptive mother, Rosemarie Tunstall, was a primary school teacher; they already had adopted another child who became her older brother Joe, and went on to have another son, Dan. Tunstall has said: "My earliest memories are Californian", from a sabbatical that her father took at the University of California, Los Angeles in 1979. She was musically oriented and her adoptive parents supported her interest. She recollected that she asked for a piano when she was four.


Tunstall grew up in St Andrews, Fife, attending Lawhead Primary, then Madras College in St. Andrews and the High School of Dundee, but she spent her last year of high school in the United States at the Kent School, a selective boarding school in Kent, Connecticut. She spent time busking on Church Street in Burlington, Vermont, and at a commune in rural Vermont. Tunstall studied at Royal Holloway, University of London. She graduated with a Bachelor of Arts in Drama & Music in 1996. Royal Holloway conferred an honorary doctorate in science on her in 2011 for her work on environmental issues as a musician.


This article uses material from the Wikipedia article "KT Tunstall", which is released under the Creative Commons Attribution-Share-Alike License 3.0.