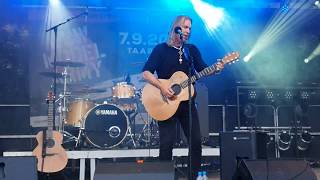 
Justin Edward Sullivan is an English singer and songwriter. He is also the frontman and lyricist of the British rock band New Model Army, which he formed in 1980 together with drummer Robert Heaton and bassist Stuart Morrow in their hometown of Bradford, Yorkshire. In the early 1980s he performed under the stage name of "Slade the Leveller", referring to the Levellers. His parents are Quaker.


Apart from his regular New Model Army albums, he has released two live albums with New Model Army material together with various members of the band capturing their off-duty tours, namely Big Guitars in Little Europe together with Dave Blomberg in 1995 and Tales of the Road together with Dean White and Michael Dean under the name Justin Sullivan & Friends in 2004. He is an active member of Red Sky Coven, which he co-formed, with Rev Hammer, Joolz Denby and Brett Selby. He collaborated with Denby and Heaton on the album Hex, which put music to Denby's poetry, and then recorded "Weird Sister" and "Spirit Stories", also putting music to Denby's poetry.


In 2003 Sullivan debuted as a solo artist with the album Navigating by the Stars. His songs "Tales of the Road", "White Lights", "Lullaby", "Navigating by The Stars" have been remixed by Christoph H. Mueller and added to the pre-release soundtrack of Exilée, a thriller by Nemo Sandman , director of Wonderful Way to Go and other videos and stills for NMA. In 2007, Sullivan sang on "Who Has Questions for the Dead?" on the This Is Menace album The Scene Is Dead.


This article uses material from the Wikipedia article "Justin Sullivan", which is released under the Creative Commons Attribution-Share-Alike License 3.0.