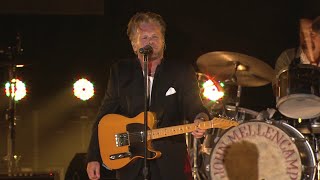 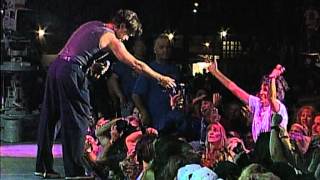 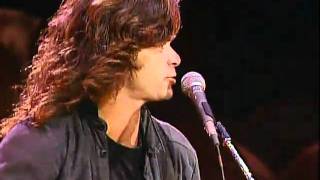 
John J. Mellencamp , previously known as Johnny Cougar, John Cougar, and John Cougar Mellencamp, is an American singer-songwriter. He is known for his catchy brand of heartland rock, which emphasizes traditional instrumentation.


Mellencamp rose to fame in the 1980s while "honing an almost startlingly plainspoken writing style" that, starting in 1982, yielded a string of Top 10 singles, including "Hurts So Good", "Jack & Diane", "Crumblin' Down", "Pink Houses", "Lonely Ol' Night", "Small Town", "R.O.C.K. in the U.S.A.", "Paper in Fire", and "Cherry Bomb". He has amassed 22 Top 40 hits in the United States. In addition, he holds the record for the most tracks by a solo artist to hit number one on the Hot Mainstream Rock Tracks chart, with seven. Mellencamp has been nominated for 13 Grammy Awards, winning one. His latest album of original songs, Strictly a One-Eyed Jack, was released on January 21, 2022. Mellencamp has sold over 30 million albums in the US and over 60 million worldwide.


Mellencamp is also one of the founding members of Farm Aid, an organization that began in 1985 with a concert in Champaign, Illinois, to raise awareness about the loss of family farms and to raise funds to keep farm families on their land. Farm Aid concerts have remained an annual event over the past 37 years, and as of 2022 the organization has raised over $60 million.


Mellencamp was born in Seymour, Indiana, on October 7, 1951. He is of German ancestry. He was born with spina bifida, for which he had corrective surgery as an infant. Mellencamp formed his first band, Crepe Soul, at the age of 14.


Mellencamp attended Vincennes University, a two-year college in Vincennes, Indiana, starting in 1972. During this time he abused drugs and alcohol, stating in a 1986 Rolling Stone interview, "When I was high on pot, it affected me so drastically that when I was in college there were times when I wouldn't get off the couch. I would lie there, listening to Roxy Music, right next to the record player so I wouldn't have to get up to flip the record over. I'd listen to this record, that record. There would be four or five days like that when I would be completely gone."


This article uses material from the Wikipedia article "John Mellencamp", which is released under the Creative Commons Attribution-Share-Alike License 3.0.