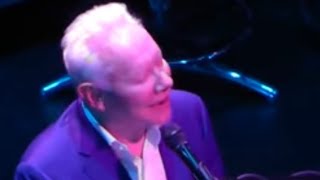 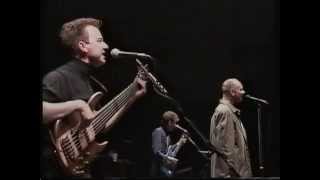 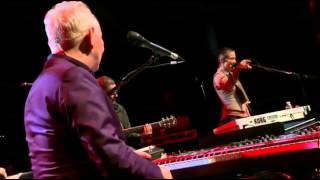 
David Ian "Joe" Jackson is an English musician and singer-songwriter. Having spent years studying music and playing clubs, he scored a hit with his first release, "Is She Really Going Out with Him?", in 1979. It was followed by a number of new wave singles, before he moved to more jazz-inflected pop music and had a top 10 hit in 1982 with "Steppin' Out". Jackson is associated with the 1980s Second British Invasion of the US. He has also composed classical music. He has recorded 20 studio albums and received five Grammy Award nominations.


Born in Burton upon Trent, Staffordshire, England, David Jackson spent his first year in nearby Swadlincote, Derbyshire. He grew up in the Paulsgrove area of Portsmouth, where he attended the Portsmouth Technical High School. Jackson's parents moved to nearby Gosport when he was a teenager. He learned to play the violin but soon switched to piano, and prevailed on his father to install one in the hall of their Paulsgrove council house. Jackson began playing piano in bars at the age of 16, and also won a scholarship to study musical composition at London's Royal Academy of Music.


Jackson's first band, formed in Gosport, was called Edward Bear, later renamed Arms and Legs. The band broke up in 1976 after two unsuccessful singles. He was still known as David Jackson when he joined Arms and Legs, but he picked up the nickname "Joe", based on his perceived resemblance to the British television puppet character Joe 90, a genius child spy. Jackson legally changed his name to Joe at age 20. Jackson then spent some time performing on the cabaret circuit to make money to record a demo.


In 1978, a record producer heard Jackson's demo tape and signed him to A&M Records. The next year the newly formed Joe Jackson Band released their debut album Look Sharp!. A mix of rock, melodic jazz, and new wave, it mined a vein similar to contemporaries Elvis Costello and Graham Parker. The album enjoyed wide critical success: in 2013, Rolling Stone magazine named Look Sharp! number 98 in a list of the 100 best debut albums of all time. Some commercial success also followed, as the debut single "Is She Really Going Out with Him?" reached the top 40 in five countries, and No. 9 in Canada.


The Joe Jackson Band released I'm the Man in 1979. The album followed a similar musical pattern, and received good, though not as strong, reviews. It did produce the single "It's Different for Girls", which became Jackson's highest charting UK single, peaking at no. 5.Beat Crazy followed in 1980. Jackson also collaborated with Lincoln Thompson in reggae crossover.


In 1981, Jackson produced an album for the British power pop group the Keys. The Keys Album was the group's only LP. The Joe Jackson Band toured extensively until it broke up. Jackson subsequently recorded an album of old-style swing and blues tunes, Jumpin' Jive, with songs by Cab Calloway, Lester Young, Glenn Miller, and Louis Jordan. The album, and associated single release, was credited to the band "Joe Jackson's Jumpin' Jive".


This article uses material from the Wikipedia article "Joe Jackson", which is released under the Creative Commons Attribution-Share-Alike License 3.0.