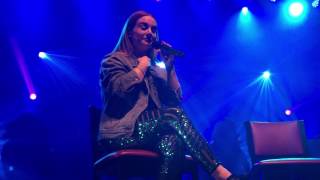 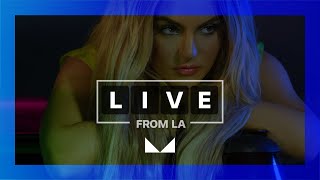 Joanna Noëlle Levesque ), known professionally as JoJo, is an American singer, songwriter, and actress. Raised in Foxborough, Massachusetts, she began performing in singing competitions and local talent shows from a young age. In 2003, record producer Vincent Herbert noticed her after she competed on the television show America's Most Talented Kids and asked her to audition for his record label Blackground Records. Having signed with them that same year, JoJo released her eponymous debut studio album the following year in June 2004. It peaked at number four on the US Billboard 200 and was later certified platinum by the Recording Industry Association of America , selling over four million copies worldwide to date.


With her debut single "Leave " peaking atop the US Billboard Pop songs chart, JoJo became the youngest solo artist in history to top the chart at age 13. The song peaked at 12 on the Billboard Hot 100 and was certified gold by the RIAA along with its follow-up single “Baby It’s You”. Her second studio album The High Road spawned her first top 5 Billboard Hot 100 hit "Too Little Too Late", peaking at number three, becoming her first single to be certified platinum by the RIAA. The album was later certified gold, selling over three million copies worldwide to date. Record label disputes delayed JoJo from commercially releasing her third studio album; she released two mixtapes independently, Can't Take That Away from Me and Agápē . Following her contractual release, JoJo signed with Atlantic Records in 2014 and released her first commercial extended play “III.” while her third studio album Mad Love, finally materialized, becoming her third top ten album on the Billboard 200. JoJo left Atlantic the following year and founded her own record label Clover Music through a joint venture with Warner Records, where she re-recorded and re-released her debut and sophomore albums as the labels first project in December 2018. JoJo's fourth studio album Good to Know was released on May 1, 2020, and received positive reviews. The album's first single, "Man", was released in March 2020. Following this album, JoJo released her first Christmas album called December Baby in October 2020.


In addition to her music career, JoJo has also pursued an acting career. In 2006, she made her on-screen feature film debut in Aquamarine and R.V. alongside Robin Williams. She has also had guest appearances on several television shows beginning with The Bernie Mac Show , American Dreams , Romeo! , Hawaii Five-0 and Lethal Weapon . Other films JoJo has appeared in include the Lifetime Television film True Confessions of a Hollywood Starlet and G.B.F. .


By 2007, JoJo had sold more than seven million records worldwide, including 2.1 million albums and four million digital downloads in the United States alone.


JoJo was born in Brattleboro, Vermont, but raised in Keene, New Hampshire, and Foxborough, Massachusetts. She has Irish, Polish and French ancestry. She grew up in a one-bedroom apartment in Foxborough in a low-income family. Her father, Joel Maurice Levesque , sang as a hobby, and her mother, Diana Levesque sang in a Catholic church choir and was trained in musical theater. JoJo's parents divorced when she was four years old, and she was raised as an only child by her mother. JoJo's stage name comes from a childhood nickname.


This article uses material from the Wikipedia article "JoJo", which is released under the Creative Commons Attribution-Share-Alike License 3.0.