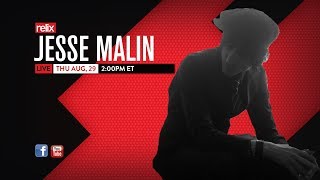 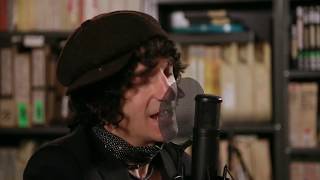 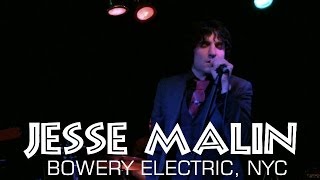 Jesse Malin is an American rock musician, guitarist, and songwriter. Starting his performing career in the New York hardcore band Heart Attack, and rising to prominence as vocalist of D Generation, he is currently a solo recording artist, having recorded numerous albums including the Lucinda Williams produced Sunset Kids. Over the course of his career, Malin has collaborated with Bruce Springsteen, Billie Joe Armstrong of Green Day, Ryan Adams and numerous other musicians.


Jesse Malin began his music career, at the age of 12, as the front-man for the seminal New York City hardcore band Heart Attack. The band auditioned at CBGBs but were denied because they couldn't bring in a drinking crowd to the bar. Following the demise of Heart Attack in 1984, Jesse worked on several other projects, including the band Hope, before joining the band D Generation for which he was the lead singer for eight years. As one of New York City's most noted bands of the 1990s, D Generation released three albums, including the critically acclaimed No Lunch, before eventually disbanding in April 1999.


Malin didn't stop writing music and went on to form two other projects, PCP Highway and Bellvue ; the latter band released one album, To Be Somebody, on Goldenseal Records. The album included versions of songs that would later be reworked for Malin's first two solo albums, including "Solitaire", "Basement Home", "Brooklyn" and "Downliner".


Being a fan of Neil Young, Tom Waits, and Steve Earle affected his work; Malin spent the next two years working on a fresh sound. Former Whiskeytown front-man Ryan Adams, who'd been a friend of Malin since the D Generation days, was impressed with Malin's new material. Adams offered to produce Malin's debut album despite the fact that he'd never produced a record before. The two headed into Loho Studios in New York in January 2001 and made an album in just six days. A deal with Artemis Records soon followed. The Fine Art of Self Destruction appeared in the United Kingdom in October 2002. The lead off first single, "Queen of the Underworld" was a moderate hit and the British press quickly hailed Malin's debut as one of the year's best.


Stateside fans were eventually able to purchase the album The Fine Art of Self Destruction in January 2003. Tour dates followed, both in America and the United Kingdom. Malin contributed to two cover albums, first he covered "Hungry Heart" for Light of Day: A Tribute to Bruce Springsteen, and then he recorded a cover of The Clash's "Death Or Glory" on the tribute White Riot Vol. 2: A Tribute to The Clash. He also picked up a nomination for the Shortlist Music Prize.


By November 2003 he was back in the studio recording tracks for his second album, The Heat, which was released in June 2004, accompanied by a string of tour dates on both sides of the Atlantic.


Malin has also collaborated with Ryan Adams & Johnny T to form the band The Finger who released two EPs which were later collected into the album We Are Fuck You.


This article uses material from the Wikipedia article "Jesse Malin", which is released under the Creative Commons Attribution-Share-Alike License 3.0.