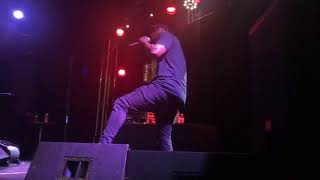 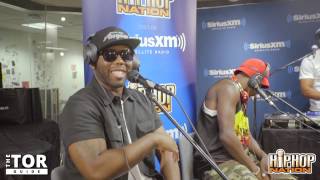 Jarren Giovanni Benton , is an American rapper and songwriter from Decatur, Georgia.


In early 2012, he signed to popular rapper Hopsin's independent record label Funk Volume and released a mixtape titled, Freebasing with Kevin Bacon in June 2012. A year later, on June 11, 2013, he released his debut studio album, My Grandma's Basement, which received positive critical reviews and debuted at number 152 on the Billboard 200 chart. After Funk Volume split up, Benton found himself between labels until 2018 when he was signed to Roc Nation, founded by Jay-Z in 2008.


From his early youth, Benton aspired to be a rapper. He told XXL, "I started trying to rap pretty young and the shit was kind of whack and then I got a little older and I started going around Atlanta performing at certain showcases. I got a little name for myself, but it was kind of hard in Atlanta, just due to the type of music that comes from there, which is you know, typical down south shit." He credits his musical influences as OutKast, Goodie Mob, Dr. Dre, Ludacris, EL-P, Busta Rhymes, Sean Price, Redman, Wu-Tang Clan, Eminem, Ras Kass, Nine Inch Nails, Chino XL, Deftones, and Marilyn Manson.


On August 5, 2009, Benton released his first official mixtape titled, Jarren Benton: The Mixtape, produced entirely by The Beatgods. On January 25, 2011 Benton released a collaboration mixtape with producer SMKA. The mixtape titled Huffing Glue With Hasselhoff was supported by the lead single "Get a Load of Me". He soon begun to gain attention after the release of his song "Skitzo". American underground rapper Hopsin would watch the music video, and passed it on to Funk Volume CEO Dame Ritter. Ritter would contact Benton a few months later and then in May 2012, Hopsin and Ritter signed Benton to their Funk Volume record label.


He had previously been courted by industry heavyweights such as Erick Sermon and No ID for major label record deals, with labels such as Def Jam Recordings and Interscope Records, however he chose to sign with the independent record label Funk Volume. His first project on Funk Volume, a mixtape titled Freebasing with Kevin Bacon would be released on June 28, 2012. The mixtape featured guest appearances from Dizzy Wright, Rittz, Freeway, Gangsta Boo, Jon Connor, and Planet VI among others.


In late 2012 he toured internationally with Hopsin, Dizzy Wright, SwizZz and DJ Hoppa for two-months, which included 54 shows in 60 days in the United States, Europe, and Australia. He explained his mindset going into his debut album saying, "This album has a different vibe. It's a lot more personal stuff so people can learn who Jarren is." He also said it will feature a more refined production sound that translates more to his ambitions of being a household name. On June 11, 2013, Benton would release his debut studio album, My Grandma's Basement, on Funk Volume. The album featured guest appearances by Dizzy Wright, Hopsin, R.A. The Rugged Man, Vinnie Paz and SwizZz.My Grandma's Basement debuted and peaked at number 152 on the Billboard 200 and number four on the Billboard Heatseekers Albums chart. He released music videos for multiple songs including "Go Off", "Life In the Jungle" and "We On " among others.


On August 2, 2013, R.A. the Rugged Man released the remix to his song "Underground Hitz" featuring Hopsin and Benton. From August 1–19 of 2013, Benton toured the United States on the Grandma's Basement Tour, his first solo headlining tour. Then, Benton went on "The Life And Times Tour" with Strange Music rapper Rittz and Atlantic Records rapper Snow Tha Product, the tour went from October 31 to December 8, 2013. Benton also featured on Hopsin's third studio album Knock Madness, on the song "Who's There" with Funk Volume label mate Dizzy Wright. Benton received the most fan-votes votes, earning a spot on the 2014 XXL freshman class and was named the "People's Champ". He was the oldest rapper that had ever been selected to the list at 32. From April 9 to June 28, 2014, Benton was touring with Tech N9ne, Freddie Gibbs and Krizz Kaliko on the Independent Grind Tour 2014. On January 27, 2015, Benton released his debut extended play, "Slow Motion" named after an old friend and fellow rapper who had recently died at the time. The EP debuted and peaked at number 168 on the Billboard 200 chart.


This article uses material from the Wikipedia article "Jarren Benton", which is released under the Creative Commons Attribution-Share-Alike License 3.0.