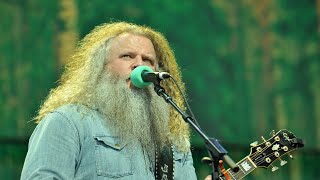 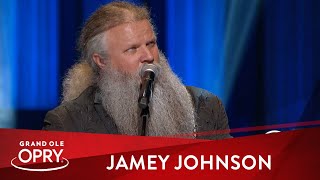 
Jamey Johnson is an American country music singer and songwriter.


Signed to BNA Records in 2005, Johnson made his debut with his single "The Dollar", the title track to his 2006 album The Dollar. He was dropped from BNA in 2006 and signed to Mercury Nashville Records in March 2008, releasing his second album, the gold-certified That Lonesome Song. This album produced two singles, the top 10 hit "In Color" and "High Cost of Living". Johnson has since released two more albums, The Guitar Song in 2010 and Living for a Song: A Tribute to Hank Cochran in 2012. In 2014, he released a five-song Christmas EP titled The Christmas Song. In addition to most of his own material, Johnson has co-written singles for Willie Nelson and Merle Haggard, Trace Adkins, George Strait, James Otto, Joe Nichols and Jessie James Decker.


Johnson was born on July 14, 1975, in Enterprise, Alabama, and raised in Montgomery, Alabama. From an early age, he was influenced by country acts such as Alabama and Alan Jackson, the latter of whom was the first act that he saw in concert. After graduating from Jefferson Davis High School, Johnson attended Jacksonville State University, the same university from which Alabama lead singer Randy Owen graduated. During his time at Jacksonville State University, he was a member of the Marching Southerners.


Johnson quit college after two years and served in the United States Marine Corps Reserve for four years. While in the Marines, he began playing country music in various bars in the Montgomery area; one of his first gigs was opening for David Allan Coe. By 2000, Johnson had moved to Nashville, Tennessee, to pursue a career in country music. One of his first connections was with Greg Perkins, a fiddler who had played for Tanya Tucker, Tammy Wynette, and other artists. Perkins invited Johnson to sing as a duet partner with Gretchen Wilson on a demo tape. Songs for which Johnson sang demos include "Songs About Me" and "That's How They Do It in Dixie" .


Johnson had also made connections with producer and songwriter Buddy Cannon, who helped him land a songwriting contract. Among Johnson's first cuts as a songwriter was "Honky Tonk Badonkadonk", which Adkins released from his 2005 album Songs About Me. That song he co-wrote along with hit songwriter Dallas Davidson and fellow country singer-songwriter Randy Houser, who later worked with Johnson again co-writing "My Cowboy" for country pop singer Jessie James for her self-titled debut album.


By 2005, Johnson had been signed to a recording contract with BNA Records. His first single, entitled "The Dollar", was released that year, followed by his Buddy Cannon-produced debut album in March 2006. "The Dollar" went on to peak at No. 14 on the Billboard Hot Country Songs charts. The album's second single, "Rebelicious", failed to enter the charts and Johnson was dropped from BNA.


This article uses material from the Wikipedia article "Jamey Johnson", which is released under the Creative Commons Attribution-Share-Alike License 3.0.