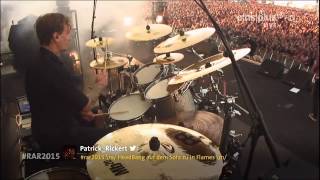 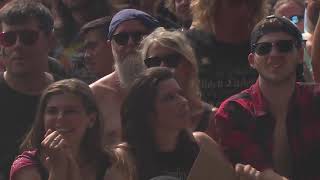 
In Flames is a Swedish heavy metal band, formed by guitarist Jesper Strömblad in Gothenburg in 1990. Alongside At the Gates and Dark Tranquillity, In Flames pioneered the genres known as Swedish death metal and melodic death metal.


During the band's early years, In Flames had a varying group of musicians recording with them, including many session musicians. By the release of Colony , the group had established a stable lineup. Their sixth studio album Reroute to Remain showed the band moving toward a newer style of music that moved further away from melodic death metal and closer to alternative metal. This decision was criticized by fans of the group's heavier metal sound; however, it increased the band's mainstream audience and bolstered their album sales. As of 2008, In Flames has sold over two million records worldwide.


Since the band's inception, In Flames have released thirteen studio albums, three EPs, and two live DVDs, their latest release being their thirteenth studio album I, the Mask in 2019. In Flames has been nominated for three Grammis Awards. They won two of these nominations; one for Soundtrack to Your Escape in the "Hard Rock/Metal of the Year" category, and one nomination for their following album Come Clarity in the same category.


In Flames was founded in 1990 by Jesper Strömblad as a side project from his then-current death metal band, Ceremonial Oath. His purpose was to write songs with a more melodic musical direction, something which he was not allowed to do in Ceremonial Oath. In 1993, Strömblad decided to quit Ceremonial Oath due to these musical differences and began focusing more on In Flames. That same year, Strömblad recruited Glenn Ljungström on guitar and Johan Larsson on bass guitar to form the first official In Flames line-up.


The trio recorded a demo in August 1993 and sent it to Wrong Again Records. In order to increase their chances of getting signed to the label, the group lied and said they had thirteen songs already recorded, when in fact they only had three. The owner of the label enjoyed the music, and immediately signed them to the label.


After being signed, work on the band's debut album began. The album, titled Lunar Strain, was recorded in Studio Fredman and released in August 1994. Since the band did not have a vocalist yet, Strömblad asked Mikael Stanne of Dark Tranquillity to provide session vocals. Many other session musicians participated in the recording as well, including guitarists Anders Iwers, Carl Näslund, and Oscar Dronjak , vocalist Jennica Johansson, and violinist Ylva Wåhlstedt.


This article uses material from the Wikipedia article "In Flames", which is released under the Creative Commons Attribution-Share-Alike License 3.0.