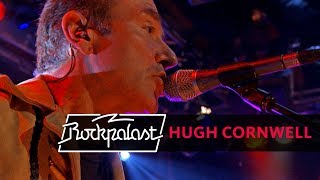 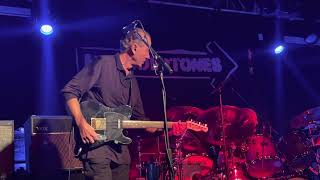 
Hugh Alan Cornwell is an English musician, singer-songwriter and writer, best known for being the vocalist and guitarist for the punk rock/new wave band the Stranglers from 1974 to 1990. Since leaving the Stranglers, Cornwell has gone on to record a further ten solo albums and continues to record and perform live.


Cornwell grew up in Tufnell Park and Kentish Town and attended William Ellis School in Highgate, where he played bass in a band with Richard Thompson, later a member of Fairport Convention. In the late 1960s, after earning a bachelor's degree in biochemistry from Bristol University, he embarked on post-graduate research at Lund University in Sweden. Not long after his arrival he formed the band Johnny Sox.


Cornwell returned to the UK in 1974 with Johnny Sox . Drummer Jet Black then joined the band. At one stage it was just Cornwell and Black, who were then joined by bassist Jean-Jacques Burnel. Guitarist, Keyboardist & Saxophonist Hans Wärmling, on holiday from Sweden, joined the line-up towards the end of 1974. The Johnny Sox name was dropped, with the band adopting the name the Guildford Stranglers before settling on the Stranglers.


Wärmling was soon replaced by Dave Greenfield, who joined in 1975 after answering an advertisement placed in the Melody Maker. Cornwell was the lead guitarist in the group and he also sang the majority of songs, with Burnel handling lead vocals on about a third of the band's songs. Years later, Burnel recalled that he often sang lyrics written by Cornwell, and vice versa, depending on "who had the best voice for that particular song."


By 1977 the group had secured a contract with United Artists Records. They went on to become the most commercially successful band to emerge from the UK punk scene, with numerous hit singles and record albums. He recorded his first album away from the group, Nosferatu, in collaboration with the Captain Beefheart's Magic Band's drummer, Robert Williams, in 1979. Cornwell's first solo album, Wolf was produced by Ian Ritchie with additional production on two tracks by Clive Langer and Alan Winstanley who had engineered the first three Stranglers albums and produced their fourth album, The Raven.


In 1990 he decided that the Stranglers could go no further artistically. He recorded the album 10 with the band before leaving after 16 years.