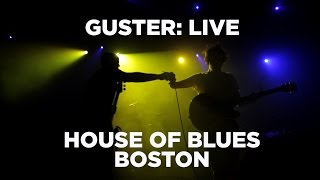 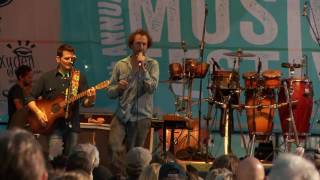 
Guster is an American alternative rock band from Boston, Massachusetts, United States. Founding members Adam Gardner, Ryan Miller, and Brian Rosenworcel began practice sessions while attending Tufts University in Medford, Massachusetts, and formed the band in 1991. The members met during the freshman Wilderness Orientation program in August of that year, playing publicly together as a trio two months later at the Midnight Cafe coffee house set in the common area of the Lewis Hall dormitory. While attending Tufts, the band lived at 139 College Avenue in Somerville, Massachusetts.


The band stayed "underground" for its first two full-length albums, Parachute and Goldfly , but broke into the musical mainstream in 1999 with its third studio album Lost and Gone Forever, featuring the single "Fa Fa", which made it onto the Adult Top 40. The band enjoyed moderate success on the charts with Keep It Together, its fourth album, with two singles in the Adult Top 40 . Joe Pisapia joined the official lineup for Keep It Together and its follow-up, Ganging Up on the Sun, which peaked at 25 on the Billboard 200. A variety of television shows and movies have featured the band's music, including Martian Child, which featured their song "Satellite"; Disturbia; Wedding Crashers; Life as a House, which makes several allusions to the band throughout the film; The O.C.; and one of the band's songs was used in an ad for The Weather Channel. The band earned its first gold record in 2018 for its single "Satellite".


Guster's tours were originally local, but began to spread as the band gained popularity. In 1999, Guster gave its first performance in Canada, followed by a 2004 tour in Britain that had four shows in London and one in Manchester. Guster maintains a liberal taping policy and has a very dedicated and active taping community. Despite this policy, the band has released several live shows via iTunes.


The band members met during freshman orientation at Tufts University in 1991. A year later, after writing a few songs in their dorm rooms, the band named itself Gus and booked its first gig. The band recorded its first album independently in 1994, titled Parachute. This album established the band as a favorite of the same 1990s scene that became popular through bands such as the Dave Matthews Band, The Disco Biscuits, moe., Phish, and Widespread Panic. The band was still in college when it recorded the album. Shortly after the release of Parachute, another artist calling himself Gus signed a deal with a major record company, forcing the band to rename itself Guster.


In 1996, Guster independently recorded their second album, Goldfly, releasing it early the next year. In 1998 the band signed with Sire Records and re-released Goldfly. A year later, the band released the album Lost and Gone Forever, produced by Steve Lillywhite. With the backing of a major label, the band appeared on shows such as the Late Show with David Letterman, and it released their first music video for their song "Fa Fa". The band also appeared at Woodstock '99, and performed at the 1999 Stardust Picnic festival at Historic Fort York, Toronto.


Guster released its fourth album, Keep It Together, in 2003, with the first single, "Amsterdam", getting significant airplay on the radio. Following the release of Keep it Together, multi-instrumentalist Joe Pisapia, who had been touring with the band, became a full-time member. A live album/DVD, Guster on Ice, compiled from two shows in Portland, Maine, in December 2003, was released in 2004. Guster released its fifth full-length studio album, Ganging Up on the Sun, on June 20, 2006. The single "Manifest Destiny/Sorority Tears" was released in November 2005 on the Internet. On September 27, 2006, Guster won Album of the Year at the Boston Music Awards. Alongside Ganging Up on the Sun, the band released on its website a documentary comedy series called Joe's Place. The band also participated in the Barenaked Ladies' Ships and Dip cruise. In 2009, Guster took part in a similar event with musician John Mayer called Mayercraft Carrier 2 aboard the Carnival Splendor.


This article uses material from the Wikipedia article "Guster", which is released under the Creative Commons Attribution-Share-Alike License 3.0.