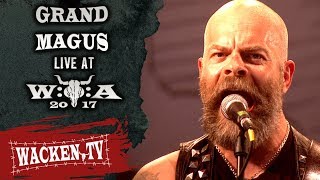 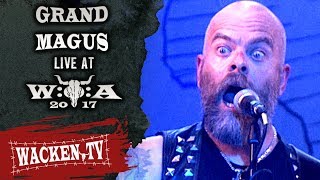 
The band originally formed in 1996 by former Cardinal Fang vocalist Janne "JB" Christoffersson, bassist Mats "Fox" Skinner and first drummer Iggy under the name 'Smack'. Early 1998 saw Iggy depart the fold and replacement Fredrik "Trisse" Liefvendahl join as a response to an advert for the vacant drummer position. A change in musical direction dictated the fabled name change to the more apt Grand Magus. A demo was recorded and on its merit received a positive response. This spearheaded an appearance on the Waterdragon Records compilation, Greatest Hits Vol. 1 and a split 7" LP with fellow countrymen Spiritual Beggars on Southern Lord Records.


Debut album Grand Magus hit on November 5, 2001, via Rise Above Records . This album continues to contribute to the band's cult status with doom and heavy metal fans today. Two more albums would follow: Monument, November 25, 2003, and Wolf's Return, June 14, 2005. These would show a progression to a more heavy metal sound but still retain the charm of their groove and stoner roots. Early 2006 saw Magus embark on a European tour supporting Cathedral, along with Electric Wizard, accentuating the band's ability to deliver the goods live.


In 2006, Trisse left the band with Sebastian "Seb" Sippola being recruited on drums. The band released their fourth album, Iron Will, on June 9, 2008, which garnered critical acclaim from the rock and music press by achieving first place in Metal Hammer Germany‘s Soundcheck. This would stand as the last album to be released under Rise Above Records.


December, 2009 saw the announcement that Roadrunner Records were to release Grand Magus' fifth album Hammer of the North in the Summer of 2010. Released June 21, 2010, Hammer of the North became a huge breakthrough within the band's history, triumphing in the Soundchecks of both German Hard Rock and Metal Hammer magazines. Further, the effort ascended to #42 on the German album chart leading to a support slot on the joint tour of legends Mötorhead and Doro. The track of the same name, "Hammer of the North", offers a euphoric plateau for crowd participation, excelling consistently as a conclusion to a live set. The album also yielded two other staple live songs in "Ravens Guide Our Way" and primary set opener "I, the Jury".


In order to concentrate more on family life, April 2012 saw the amicable departure of Seb from the band. This in turn led to long time friend Ludwig "Ludde" Witt, of Spiritual Beggars, taking helm at the skins. On May 25, 2012, their sixth album, The Hunt, was released via Nuclear Blast.


The band's seventh offering came in the form of Triumph and Power, released January 31, 2014, and continued the momentum of its predecessor. Cover artwork was created by the talented and acclaimed artist Anthony Roberts.


This article uses material from the Wikipedia article "Grand Magus", which is released under the Creative Commons Attribution-Share-Alike License 3.0.