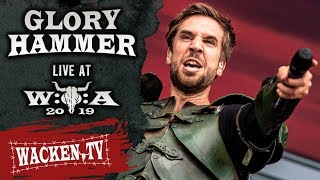 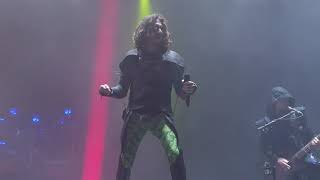 
Gloryhammer is a British power metal band founded by keyboardist Christopher Bowes, lead vocalist of the band Alestorm. Each member of the band represents a character in the story concept. The band appears on-stage in armour and costumes to represent their respective characters.


Gloryhammer released their debut album Tales from the Kingdom of Fife through Napalm Records on 29 March, 2013. Prior to the release of the album, the single "Angus McFife" was released through the Napalm's YouTube channel on 7 March 2013.


The band released videos on Napalm's channel for "Universe on Fire" on 8 August 2015 and "Rise of The Chaos Wizards" on 11 September 2015. On the 25 September, 2015, Gloryhammer released their second studio album titled Space 1992: Rise of the Chaos Wizards with which the band entered the official album charts in several countries, followed by tours with bands such as Stratovarius, Blind Guardian and HammerFall.


In January 2018, the band did a headlining tour across Europe, consisting of 24 shows in a row.


In September 2018, they toured with Alestorm through North America for the first time, playing 19 shows in the USA and Canada.


This article uses material from the Wikipedia article "Gloryhammer", which is released under the Creative Commons Attribution-Share-Alike License 3.0.