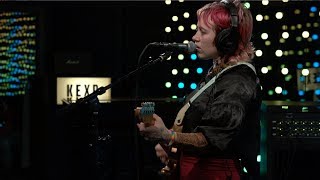 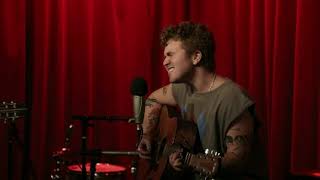 Girlpool live at Paste Studio on the Road: LA 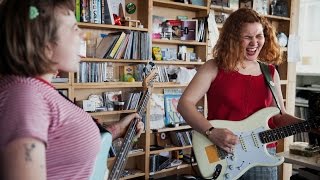 Girlpool were an indie rock band from Los Angeles, California, formed by friends Avery Tucker and Harmony Tividad. Their debut self-titled EP Girlpool was released on Bandcamp in 2014 and re-released on Wichita Recordings later that year. They released their debut album Before the World Was Big in 2015, followed by Powerplant and What Chaos Is Imaginary . Their fourth studio album, Forgiveness , was released on April 29.


Girlpool was formed in 2013 by friends Avery Tucker and Harmony Tividad. Their self-titled debut EP "Girlpool" was released on Bandcamp in February 2014, and re-released on Wichita Recordings later that year. The EP received generally favorable reviews from critics, with a weighted average score of 79 on Metacritic. In his review of this EP, Chris Conaton compared their sound to "an angrier, socially conscious Kimya Dawson."


On June 2, 2015, Girlpool released their debut album, Before the World Was Big, also on Wichita Recordings. It also received generally favorable reviews from critics, with a 79 out of 100 score on Metacritic.Pitchfork's Jayson Greene gave it a score of 7.8 out of 10 and described it as "a quiet album of uncommon intensity."


In March 2017, Girlpool announced they had signed to Anti- Records, along with their second studio album and a United States tour. On May 12, 2017, the band released their second studio album, Powerplant, via Anti-. The album received an 8.3 by Jillian Mapes on Pitchfork. Mapes described their new sounds as "echoing second-wave emo sourness , Britpop jangle , and classic alt-rock loud-quiet-loudness throughout". In Summer 2017, Avery Tucker came out as a trans man.


On February 1, 2018, Girlpool released "Picturesong" featuring Dev Hynes. The band said about the song, "Picturesong is a word invented to explore what we create in each other when we want to feel deep love because of loneliness or otherwise, and brings into question the reality and delusion of the things we feel," Hynes said about making a song with Tucker and Tividad, “I’m such a fan of Girlpool, and loved working with them. Their harmonies are some of my favourites that are out there.” The song was initially released on SoundCloud, then on other streaming services a week later.


On October 9, 2018, the band released the singles "Lucy's" and "Where You Sink", their first release to feature Tucker singing much deeper than he did previously. On November 13, 2018, Girlpool released the single "Hire", and announced their third studio album. The album, titled What Chaos Is Imaginary, was released on February 1, 2019. It received generally favorable reviews, with an average score of 74 on Metacritic. Sasha Geffen of Pitchfork said about the album, "Weaving in and out of concrete, direct, indie-rock songwriting and meditative, impressionistic dream pop, the record takes up more space than any of Girlpool’s previous music."


On March 12, 2020, Girlpool released the single "Like I'm Winning It" and an accompanying music video. Tucker said about the song:


This article uses material from the Wikipedia article "Girlpool", which is released under the Creative Commons Attribution-Share-Alike License 3.0.