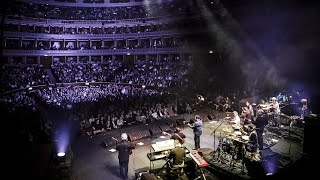 Gipsy Kings - Live at The Royal Albert Hall in London 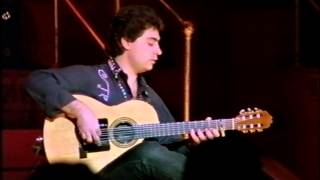 Gipsy Kings - Live at The Royal Albert Hall in London

Gipsy Kings are a group of flamenco, salsa, and pop musicians from Arles and Montpellier in the south of France, who perform in a mixture of languages, mostly in Spanish, but also mixing southern French dialects. Although the group members were born in France, their parents were mostly gitanos, Spanish Romani who fled Spain during the 1930s Spanish Civil War. They are known for bringing rumba flamenca, a pop-oriented music distantly derived from traditional flamenco music, to worldwide audiences. The group originally called itself Los Reyes.


Gipsy Kings, born in France but brought up within Spanish culture, are largely responsible for bringing the sounds of progressive pop-oriented flamenco to a worldwide audience. The band started out in Arles, a town in southern France, during the 1970s, when brothers Nicolas and Andre Reyes, the sons of flamenco artist Jose Reyes, teamed up with their cousins Jacques, Maurice, and Tonino Baliardo. At the time, Reyes and Manitas de Plata were a duo who triggered the wider popularity of rumba flamenca . When Reyes split from Manitas de Plata, he started a group made up of his sons, which he called Los Reyes .


Los Reyes started out as a gypsy band. They traveled around France, playing at weddings, festivals, and in the streets. Because they lived so much like gypsies, the band adopted the name Gipsy Kings. Later, they were hired to add color to upper-class parties in such places as St. Tropez, but their first two albums attracted little notice. At this point, the Gipsies played traditional flamenco invigorated by Tonino Baliardo's guitar playing and Nicolas Reyes' voice.


The Gipsy King lineup featured a combination of left and right-handed guitarists; three of the Reyes brothers play guitar left-handed, and play left-hand guitars that are strung for right-handers , while Diego Baliardo plays a left-handed guitar that is strung for left hand . Together with right-handers Canut and Paul Reyes, and Paco Baliardo, these guitarists focus on delivering the strong underpinning rhythms while the more complex leads are performed by the right-handed and conventionally-styled Tonino Baliardo.


Gipsy Kings was released in the United States in 1989 and spent 40 weeks on the charts, one of few Spanish-language albums to do so. The band covered "I've Got No Strings" for the 1991 Disney video and compilation album Simply Mad About the Mouse. Their cover version of "Hotel California" was an example of fast flamenco guitar leads and rhythmic strumming; it was featured in the 1998 Coen Brothers' movie The Big Lebowski. The 2010 film Toy Story 3 featured their rendition of "You've Got a Friend in Me", a Spanish-language version titled "Hay un Amigo en Mi", and performed in a recognisably flamenco style. "Bamboleo" was featured in a grocery store scene in the 2016 film Sing.


The band have been criticised by flamenco purists, but Nicolas Reyes has said in an interview that the flamenco world is not in great shape itself and that the band are proud of their success. Their 1997 album Compas contains more traditional flamenco music.


This article uses material from the Wikipedia article "Gipsy Kings", which is released under the Creative Commons Attribution-Share-Alike License 3.0.