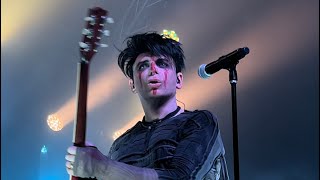 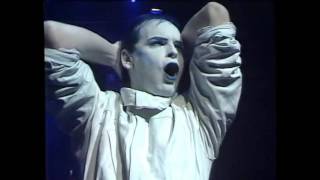 
Gary Anthony James Webb , known professionally as Gary Numan, is an English musician. He entered the music industry as frontman of the new wave band Tubeway Army. After releasing two albums with the band, he released his debut solo album The Pleasure Principle in 1979, topping the UK Albums Chart. While his commercial popularity peaked in the late 1970s and early 1980s with hits including "Are 'Friends' Electric?" and "Cars" , Numan maintains a cult following. He has sold over 10 million records.


Numan faced intense hostility from critics and fellow musicians in his early career, but has since come to be regarded as a pioneer of electronic music. He developed a signature sound consisting of heavy synthesiser hooks fed through guitar effects pedals, and is also known for his distinctive voice and androgynous "android" persona. In 2017, he received an Ivor Novello Award, the Inspiration Award, from the British Academy of Songwriters, Composers, and Authors.


Gary Anthony James Webb was born on 8 March 1958 in Hammersmith, London. His father was a British Airways bus driver based at Heathrow Airport. He was the only child until he was seven when his family adopted his cousin John, who would also become a musician and play in Numan's backing band. He was educated at Town Farm Junior School in Stanwell; Ashford County Grammar School; and Slough Grammar School, followed by Brooklands Technical College in Weybridge, Surrey. He joined the Air Training Corps as a teenager and then briefly held various jobs including forklift truck driver, air conditioning ventilator fitter, and accounts clerk.


When Numan was 15, his father bought him a Gibson Les Paul, which became his most treasured possession. He briefly played in various bands and looked through ads in Melody Maker for bands to join. He claims to have unsuccessfully auditioned as guitarist for the then-unknown band the Jam before joining Mean Street and the Lasers, where he met Paul Gardiner. The latter band eventually morphed into Tubeway Army with his uncle Jess Lidyard on drums and Gardiner on bass and were signed to Beggars Banquet Records. His initial pseudonym was Valerian, probably in reference to the hero in French science fiction comic series Valérian and Laureline. He later picked the surname Numan from an advertisement in the Yellow Pages for a plumber whose surname was Neumann.


Numan came to prominence in the 1970s as lead singer, songwriter, and record producer for Tubeway Army. After recording an album's worth of punk-influenced demo tapes , they were signed by Beggars Banquet Records in 1978 and quickly released two singles, "That's Too Bad" and "Bombers", neither of which charted.


A self-titled, new wave-oriented debut album later that same year sold out its limited run and introduced Numan's fascination with dystopian science fiction and synthesisers. Though Tubeway Army's third single, the dark-themed and slow-paced "Down in the Park" , never appeared on the charts, it became one of Numan's most enduring and oft-covered songs. It was featured with other contemporary hits on the soundtrack for the 1980 film Times Square, and a live version of the song can be seen in the 1982 film Urgh! A Music War. Following exposure in a television advertisement for Lee Cooper jeans with the jingle "Don't Be a Dummy", Tubeway Army released the single "Are 'Friends' Electric?" in May 1979. After a modest start at the lower reaches of the UK Singles Chart at No. 71, it steadily climbed to No. 1 at the end of June and remained on that position for four consecutive weeks. In July its parent album Replicas also reached No. 1 on the albums chart.


This article uses material from the Wikipedia article "Gary Numan", which is released under the Creative Commons Attribution-Share-Alike License 3.0.