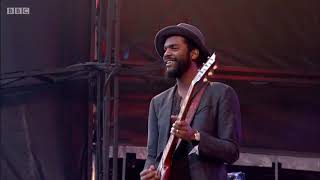 
Gary Lee Clark Jr. is an American musician from Austin, Texas. He is best known for his fusion of blues, rock and soul music with elements of hip hop. In 2011 Clark signed with Warner Bros Records and released The Bright Lights EP. It was followed by the albums Blak and Blu and The Story of Sonny Boy Slim . Throughout his career Clark has been a prolific live performer, which has been documented in two releases: Gary Clark Jr. Live and Gary Clark Jr Live/North America . He has shared the stage with Eric Clapton, Tom Petty and the Heartbreakers, B.B. King and the Rolling Stones. In 2014, Clark was awarded a Grammy for Best Traditional R&B performance for the song "Please Come Home". His latest album, This Land, was released on February 22, 2019. In 2020, he won the Grammy Award for "Best Rock Song" and "Best Rock Performance" for the song "This Land" from his album of the same name.


Gary Clark Jr. began playing guitar at the age of 12. Born and raised in Austin, Texas, Clark played small gigs throughout his teens until he met promoter Clifford Antone, proprietor of the Austin music club Antone's. Antone's was the launch pad where Jimmie and Stevie Ray Vaughan redefined blues at the time. Soon after meeting Clifford, Clark began to perform with other musical icons, including Jimmie Vaughan. Vaughan and others in the Austin music community helped Clark along his musical path.


Clark sang on the 2010 bonus track cover of the Jackson 5's "I Want You Back" on Sheryl Crow's album 100 Miles from Memphis.


In 2012 Clark recorded with Alicia Keys on two different songs in New York City. He co-wrote the song Fire We Make with Alicia Keys, Pop Wansel and Oak Felder for the album Girl on Fire.


On August 28, 2012, Alicia Keys revealed via Twitter that Clark's new album and major-label debut called Blak and Blu would be released on October 22, 2012.


This article uses material from the Wikipedia article "Gary Clark Jr", which is released under the Creative Commons Attribution-Share-Alike License 3.0.