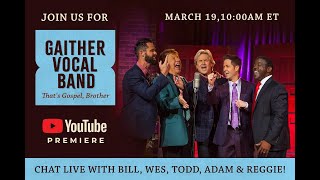 
The Gaither Vocal Band is an American southern gospel vocal group, named after its founder and leader Bill Gaither. On March 1, 2017, it was announced that the Gaither Vocal Band lineup consisted of Reggie Smith, Wes Hampton, Adam Crabb, Todd Suttles, and Bill Gaither. Although the group started out recording contemporary Christian music in the 1980s, it became known for southern gospel after the popularity of the Gaither Homecoming videos.


The lineup of the band changes often, with artists leaving to work on solo careers, and new and old ones coming to replace them. Besides Bill Gaither, singers with the longest tenure in the band include Guy Penrod , Mark Lowry , Michael English , David Phelps and Wes Hampton .


The band has released 29 albums , at least 19 of which have charted. The band has also released 10 DVDs, which feature many other Christian artists as well. The Gaither Vocal Band has been honored with two Grammys and 17 Dove Awards.


The Gaither Vocal Band is named after gospel legend and leader Bill Gaither. It was the successor-group of the Bill Gaither Trio. By the 1980s, Bill Gaither, along with wife Gloria Gaither, were both very successful songwriters. For example, their song, "He Touched Me" was covered by Elvis Presley, after which he even named his album He Touched Me. Presley won a Grammy for the album. Bill Gaither felt that his trio had reached its peak in the mid-1980s, but his desire to make another gospel hit kept the trio going.


The original Vocal Band was formed spontaneously, backstage of a Gaither Trio concert. It consisted of Bill Gaither and Gary McSpadden of the trio, along with two of the trio's backup singers, Steve Green and Lee Young. The quartet sang "Your First Day in Heaven" on stage that night. Their debut album, the self-titled The New Gaither Vocal Band, debuted in 1981.


According to the liner notes of the CD compilation The Best of the GVB, the term "vocal band" was used instead of "quartet" because it did not limit Gaither in terms of sound or number of group members. According to Steve Green on the Gaither Vocal Band Reunion video, he came up with the name and convinced Gaither to use it because he, at the time, did not want to be associated with "quartet music".


This article uses material from the Wikipedia article "Gaither Vocal Band", which is released under the Creative Commons Attribution-Share-Alike License 3.0.