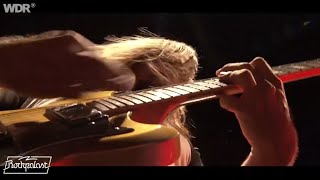 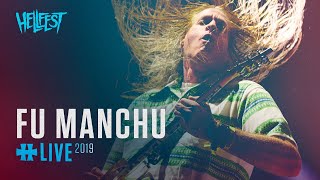 
Fu Manchu is an American stoner rock band, formed in Southern California in 1985, and long-associated with the Palm Desert Scene.


Abshire left Fu Manchu before they recorded their second album, Daredevil, in 1995. He was replaced by Brad Davis. The band promoted Daredevil with extensive touring throughout the US and Canada, and reached a wider audience thanks to an opening slot with Monster Magnet, who at the time were the commercial darlings of the stoner rock genre.


Romano and Glass left shortly after the release of Fu Manchu's third album, In Search Of... , citing personal and musical differences with Hill. They were replaced by Brant Bjork and Bob Balch, respectively. Glass, Romano and Abshire soon regrouped to form Nebula, a power trio that took the jam-influenced side of Fu Manchu and expanded on it. Members of Nebula have commented that "we're all family" to fans wearing Fu Manchu shirts at their concerts.


Fu Manchu went on to release several successful albums and reinforce their reputation as a powerful live act. The band had gained this reputation over the years due to their performance when touring with notable bands such as Kyuss, Monster Magnet, Marilyn Manson, Clutch, Corrosion of Conformity, White Zombie, Sevendust, and P.O.D., among others.


This article uses material from the Wikipedia article "Fu Manchu", which is released under the Creative Commons Attribution-Share-Alike License 3.0.